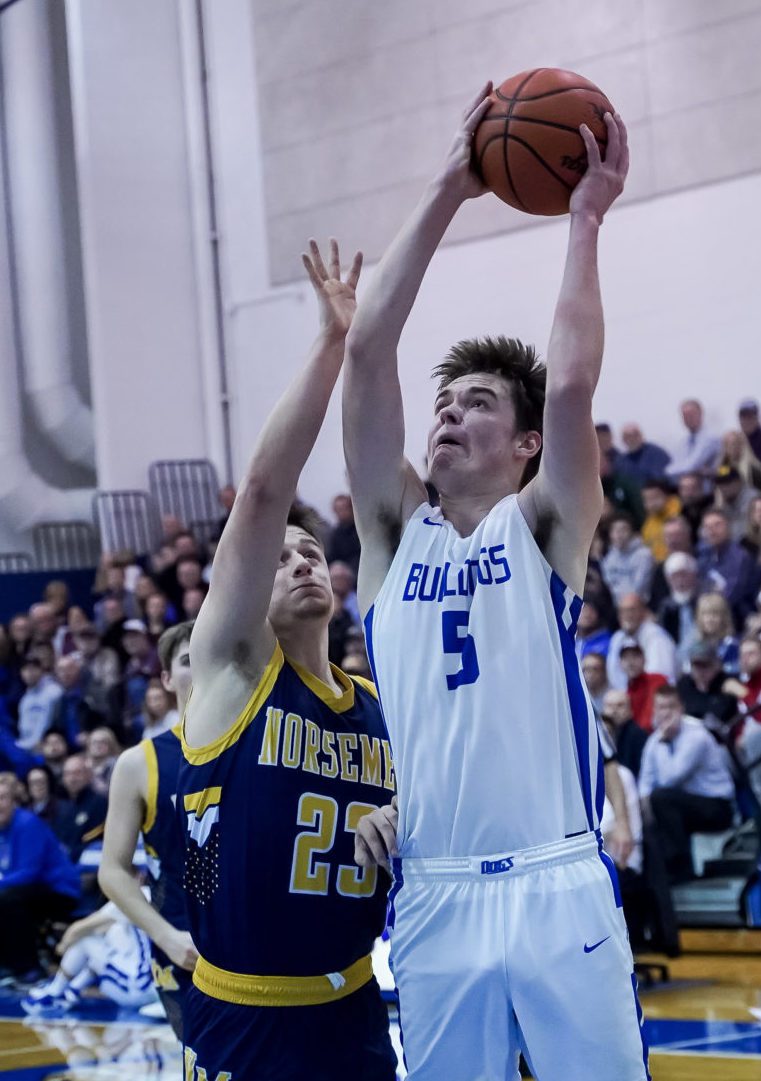 Jacob May goes up over North Muskegon’s No. 23 Brenden Moat. Photo/Kris Rake

But that means nothing now that the state tournament has begun. One loss and Bulldogs will go home, just like any other team.

The good news for Ravenna fans is that their team showed no signs of slowing down on Monday in its Division 3 district tournament opener against North Muskegon. The Bulldogs showed complete focus in a 59-41 victory over the Norse, a team they beat twice in close games in the regular season.

The Bulldogs now move on to Wednesday’s district semifinal round, when they will host Kent City at 5:30 p.m. The winner will advance to Friday’s championship game.

“That season is over,” Ravenna head coach Courtney Kemp said about the perfect regular season. “This is a completely different season, and winning those regular season games was to prepare us for districts.”

The Bulldogs did not come out of the gates hot. They overcame six turnovers and 4-of-12 shooting in the first quarter to grab a 10-7 lead at the first buzzer.

The Bulldogs’ shooting got better in the second quarter, when they hit 5 of 11 and took a 23-15 lead into halftime. They helped themselves by grabbing eight offensive rebounds in the first half, leading to valuable putback points.

“When you shoot it as poorly as we did it’s huge to get offensive rebounds,” Kemp said. “We felt like it was quite a gut punch to them for us to keep getting possession after possession.”

Senior Trevor Sterken took over for the Bulldogs after halftime, scoring eight straight points to open the third quarter. He finished with 11 points in the third, helping Ravenna take a 40-28 edge into the fourth. 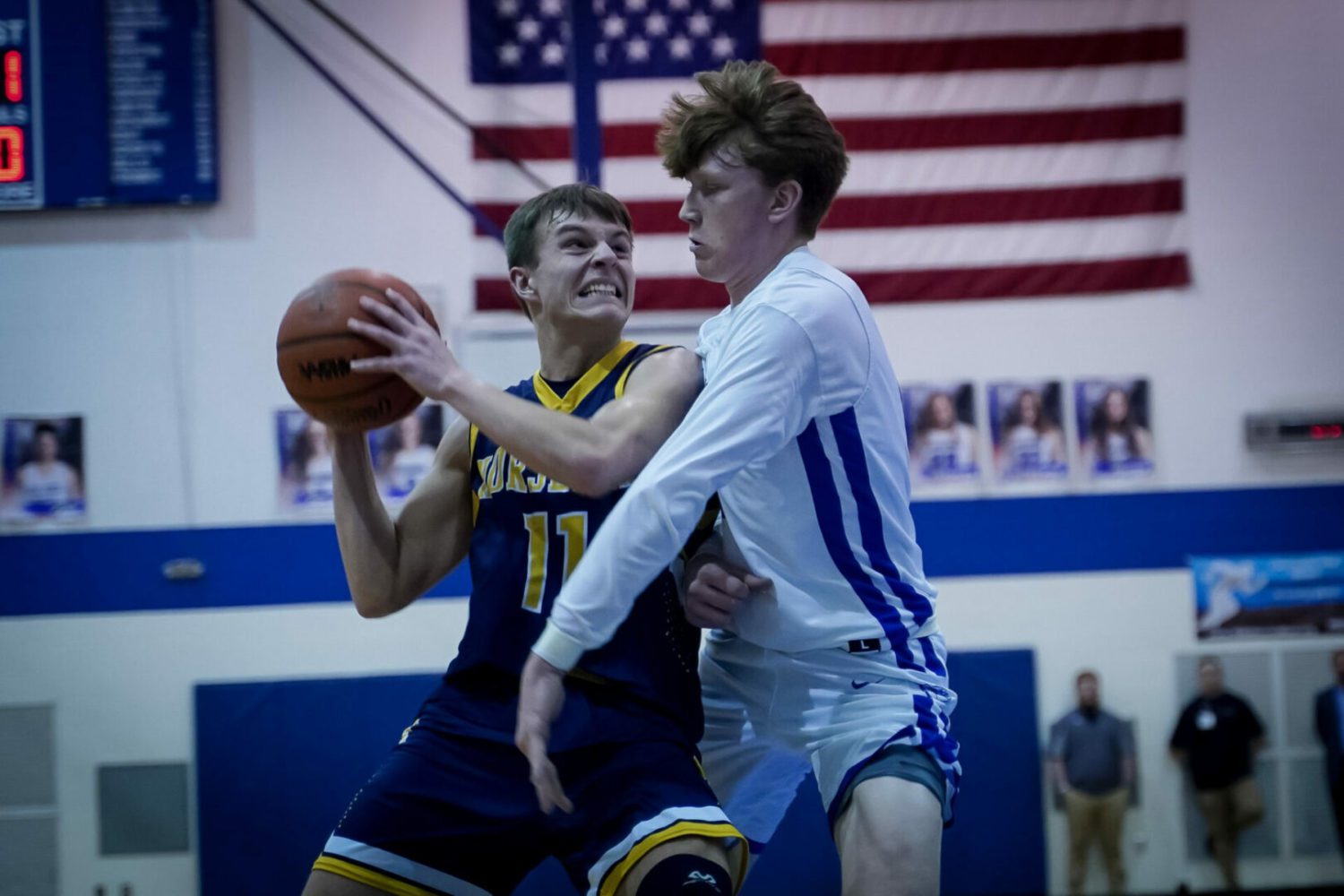 North Muskegon’s No. 11 Eric Rypstra fights his way to the hoop against Brennen McManus. Photo/Kris Rake

“He’s like Vinnie Johnson from the Piston days,” said Kemp about Sterken, who often calls himself ‘Microwave,’ the same nickname Johnson had in his Detroit playing career. “He has no idea who Vinnie Johnson is, but he calls himself that. It’s just a benefit to have a guy like him who knows what do with the ball and can get going.”

Ravenna went 10-for-12 from the free throw line over the final 2:21 of the game to clinch the victory.

Sterken led all scorers with 19 points while teammate Calvin Schullo chipped in 18. North Muskegon was paced by Eric Rypstra with 11 points.

“It’s super tough,” said Kemp about beating a good team three times in one season. “Especially a team like North Muskegon, who we have a healthy respect for.”

North Muskegon, which finished the season with a 14-6 record, will lose nine seniors to graduation.

“I’ve really coached these guys since third grade,” said North Muskegon head coach Chuck Rypstra about the senior class, which includes his son Eric Rypstra. “It’s going to be a tough banquet. But this group did a lot of stuff together and it’s a good group. This isn’t the end for them, because it’s just one part of their lives together.”

Eric Rypstra goes through the Ravenna defense in the lane. Photo/Kris Rake

Ravenna’s No. 2 Calvin Schullo gets a hand in the face of Eric Rypstra. Photo/Kris Rake

Jacob May goes up over North Muskegon’s No. 23 Brenden Moat. Photo/Kris Rake

Ravenna’s No. 44 Hunter Funk fights to get a shot over Noah Stewart. Photo/Kris Rake