truly recognized until his ability to read lips was briefly taken away. 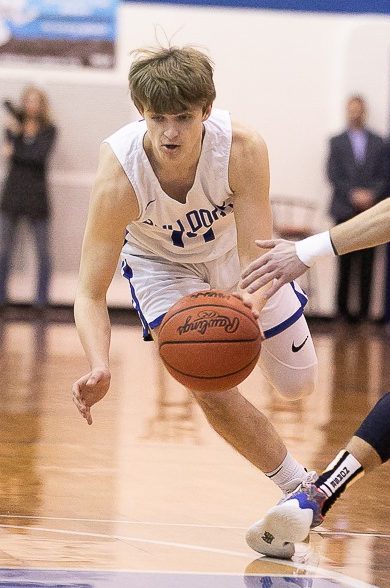 Ravenna’s Sterken drives through the paint against North Muskegon in districts. Photo/Randy Riksen

“So the story that’s been passed around within my family is, I was sitting on my mom (Missy’s) lap, and she was reading a newspaper and it was in a really dark room,” Sterken recalled. “And I told my mom that she needed to turn the lights on because I couldn’t hear her. I couldn’t read her lips.

“I was pretty young at the time.”

Fortunately today, Sterken said he’s “really good at reading lips,” a skill that he’s developed on his own since he was a young child.

It’s a vital skill for the 5-foot-9, 150-pound Sterken, especially on the athletic fields and courts at Ravenna High School, where he helped the Bulldogs have great seasons in football and basketball.

Sterken is half deaf in both of his ears, or what an ear specialist would label as severe-to-deaf classification. He started wearing hearing aids around the age of 4, about the same time as his dark-room discovery with his mom.

“There were no complications or anything, he was just born that way,” Missy Sterken said. “He failed his hearing screens at birth, but we couldn’t get hearing aids for him because he also had a lot of fluid in his ears.”

Missy said “enough was enough,” when she learned lip reading was Trevor’s crutch, increasing the urgency to get him hearing aids. A pair today can cost the family upwards of $3,500 to $6,500, and insurance doesn’t always cover the full expense.

Sterken’s hearing as a toddler was slightly improved when he had tubes inserted, but for only a brief period of time. 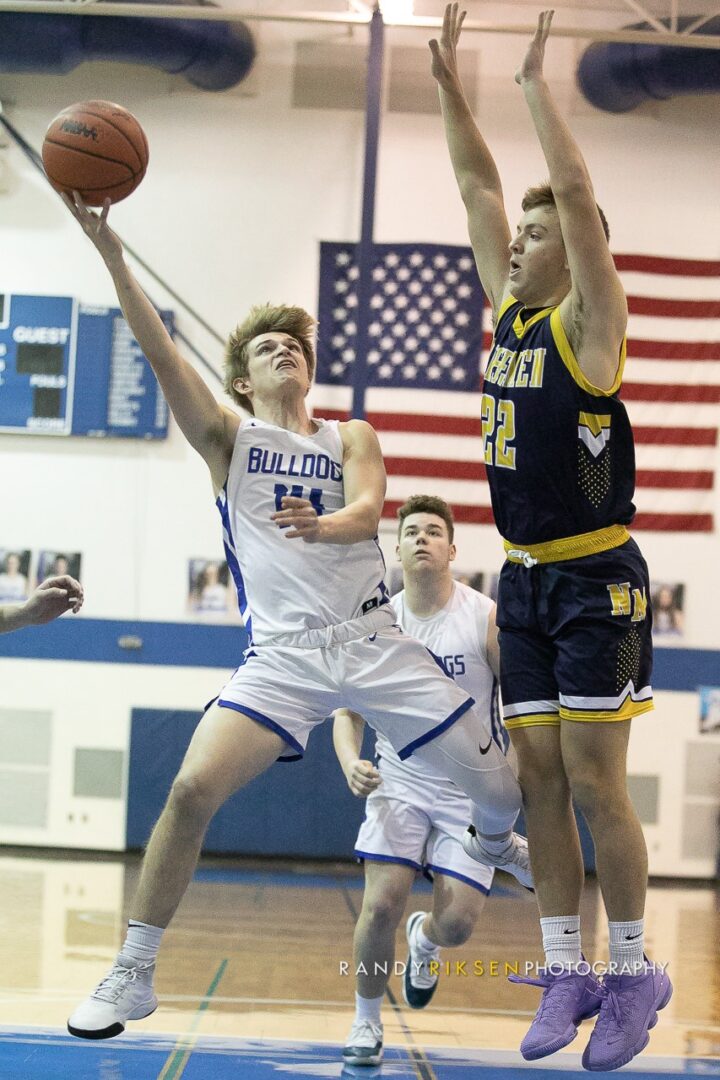 “He went through 5-6 sets of tubes by the time he was four,” Missy said.

Through it all, Missy and Trevor’s dad, Jeff, have strived to treat Trevor like any other child. Because of that, he has accomplished remarkable things throughout his life.

“We do not use sign language,” Missy said. “For our family, we’ve never treated it as a difficulty for him, and honestly, it’s something that we do not even talk about that often. It’s something that he hasn’t let impact him, so for us, it’s nothing different.”

Most Ravenna fans would tell you that Sterken’s condition has had little effect on his performance in football or basketball. Some fans, Missy said, are surprised to learn of Trevor’s hearing loss, because he appears to be like any other teenager.

During his memorable senior year, Trevor was a vital part of Ravenna’s Division 6 playoff football team as a defensive back, and the Bulldogs’ groundbreaking 20-0 regular season on the basketball court.

Sterken managed to stand out in both sports while overcoming daily communication challenges.

Ravenna basketball Coach Courtney Kemp joked that Sterken probably enjoys not hearing him bark out orders or constructive criticism at practice. But without seeing Kemp’s lips move, or hearing the echo of his or his teammates’ instructions, Sterken said he can feel lost on the court. 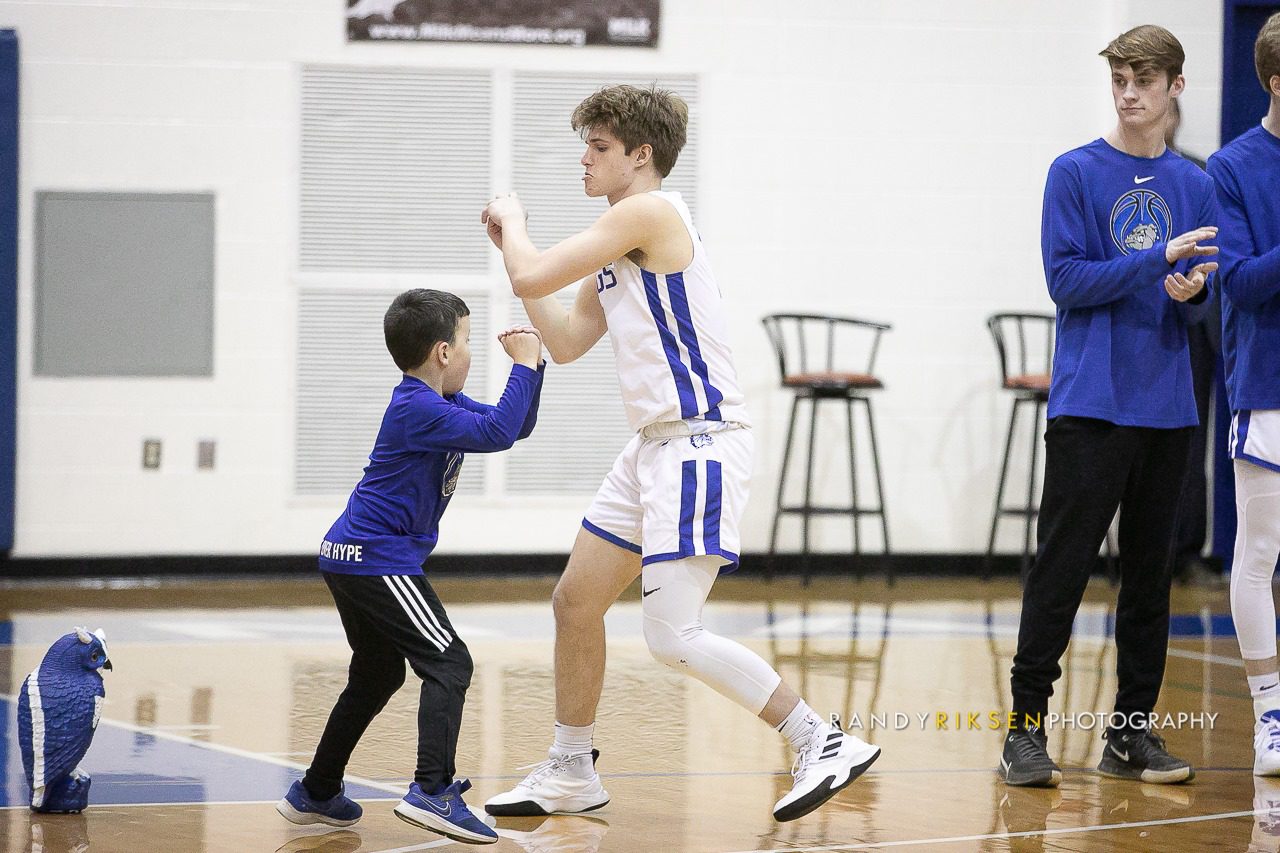 Sterken after getting his name announced in the starting lineup for Ravenna. Photo/Randy Riksen

“It’s nice because I can tune out the opposing student sections when they’re being really loud,” Sterken said during the recent basketball season. “When I know the play or the play to call, I feel more comfortable. It’s harder when (fellow guard Conner Kilbourne) or someone else is bringing the ball up because I need to try to read their lips. But my teammates do a good job of being loud with the play. They echo the heck out of it.”

Kemp said he found the best way to coach Sterken was to let him run the show, because his ability to read the court and adjust on the fly is off the charts.

“It’s amazing what Trevor does,” Kemp said after the Bulldogs clinched a share of the league title on Feb. 18 at Oakridge. “Some people would never know he’s partially deaf. Some would call that a disability, but for Trevor, it’s a way of life for him.

“You talk about good players making bad coaches look good,” Kemp added. “That’s Trevor. I’ve found the way he thrives is to give him direction and just get out of his way. If you give him rules and restrictions, it’s going to ruin how good of a point guard he can be.”

Sterken averaged 10 points, four rebounds, three assists and two steals a game during the basketball season, while making an outstanding 47 percent of his three-point shots. 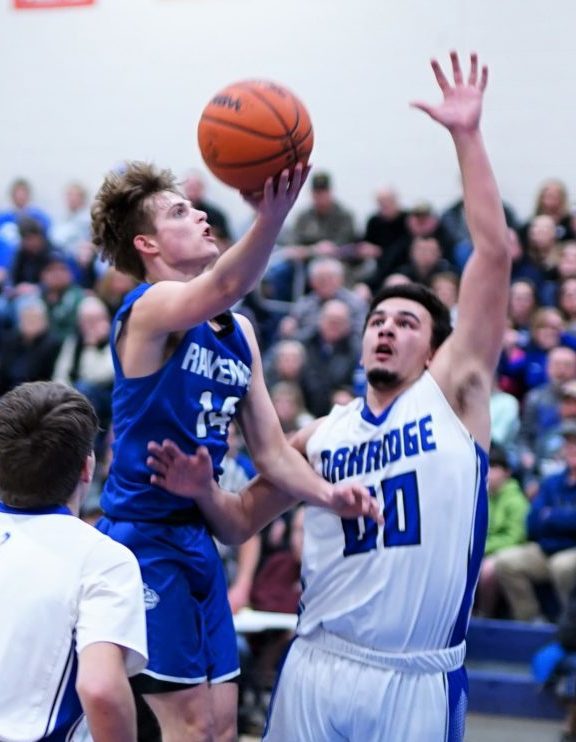 Trevor Sterken flips up a shot as Luke Martin tries to get a stop for Oakridge. Photo/Sherry Wahr

Sterken said he learned the game from watching and playing against his older brother, Tyler, as well as receiving constant encouragement from his dad, who is the girls varsity basketball coach at Ravenna.

Coach Kemp said a turning point for Sterken occurred during his sophomore year.

He played with a chip on his shoulder, Kemp said, because several of his teammates were called up to varsity, while Sterken remained on JV. It turned out to be a blessing in disguise, because it presented an opportunity for Sterken to get a lot of playing time at point guard, and he improved his ball-handling and playmaking abilities.

“That’s when I knew he was going to be something special,” said Kemp, who also coached Sterken at the JV level.

Sterken also took advantage of an opportunity this season. Outstanding guard Josh Cox, who led Ravenna in scoring as a junior, was lost for the season with a knee injury during the Bulldogs’ opening football game in September.

“When Josh got hurt, I knew we had to have other guys step up,” Sterken said. “Josh played such a big role on our team last season, but I knew if we played our game, we could still have a good season.”

As it turned out, a strong group of Bulldog seniors, who have been playing together since most of them were 5 years-old, carried the basketball team to heights that few saw coming. That group included post players Hunter Funk and Jacob May, wing Calvin Schullo and guards Jack Emery and Kilbourne. 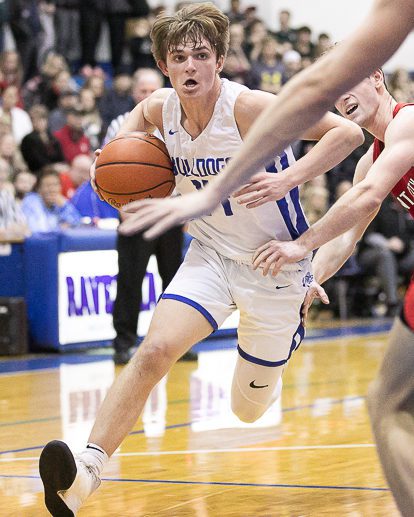 Trevor Sterken drives to the hoop for Ravenna. Photo/Randy Riksen

Ravenna’s dream season came to a stunning end on March 11 in the Division 3 district semifinals, when the Bulldogs were upset by Kent City, 47-37, ending their season at 21-1.

Nearly two weeks after that game, Sterken said he and his teammates were still recovering from the loss.

“We’re all still bummed out,” he said. “We definitely didn’t play our best. That first half, we had a lot of turnovers and we just jacked up a lot of outside shots. We weren’t patient offensively.

“After the game, I was just mad. I didn’t want it to end that way.”

But looking back at the season as a whole, Sterken said “it’s been amazing.”

“Growing up with these guys, we always had talent,” he said. “We felt we really could have a good season this year, but it was surprising to go 20-0. Winning with your best friends, there’s no better feeling than that.”

On the gridiron, Sterken was a lockdown cornerback on the Bulldogs’ defense, which limited opponents to an average of just 10.6 points  per game last fall.

Sterken said he didn’t wear his hearing aids in football due to the feedback noise they would cause from echoing in his helmet. Even without them, Sterken said it’s easier to play football than basketball because he received his defensive signals from the Bulldogs’ safeties. 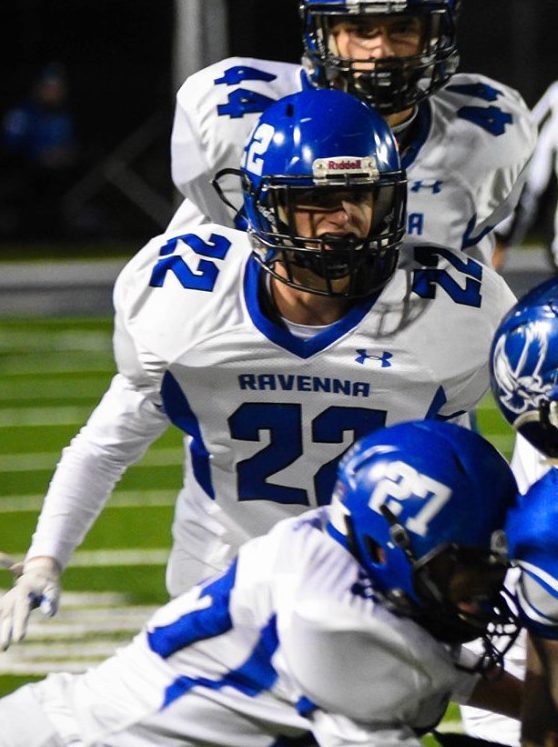 No. 22 Sterken during a play against Oakridge during the football season. Photo/Sherry Wahr

“He’s actually received some interest from a (college) coach for football in Washington D.C. at a school for the hearing-impaired,” Missy said. “But Trevor loves basketball, so his first question for him was if they had a basketball team.”

Sterken said he would love nothing more than to play basketball at the next level, but currently, he has no idea where he’s going or what he’ll pursue academically. He admits he has struggled at times in the classroom, with his hearing being an obvious hindrance.

“I’m sure that’s a big part of (his struggles),” Missy said. “There will be times when a teacher will ask him if he heard their instructions and he’ll say yes, but in reality, he has no idea what they actually said.”

Fortunately, he’s had teachers at Ravenna who have pushed him to achieve his potential, like Trish Vermer, who teaches Sterken in a life skills class and has acted as a mentor and motivator throughout his high school career.

“We call her his school mom,” Missy said. “She’s been amazing. She’s experienced in teaching students with Trevor’s condition and has really pushed him when he needs it. He wouldn’t have survived high school without her.”