MUSKEGON TOWNSHIP – When Hunter McCall won a Division 2 state wrestling championship on Saturday at Detroit’s Ford Field, he accomplished a

longtime dream for himself, as well as several other people who have played very big roles in his development.

Of course the biggest winner was McCall himself, who capped off a spectacular four-year varsity career in the best way possible, beating Lowell’s Keegan Nugent 9-1 in the 215-pound state championship match. 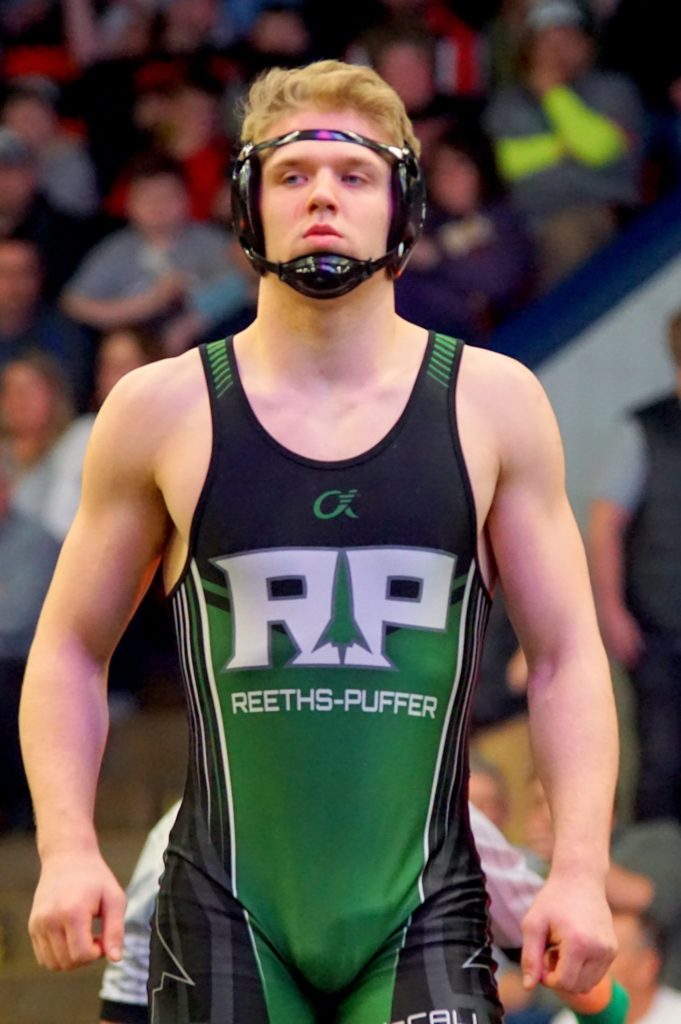 But McCall’s performance also fulfilled a longtime dream for Reeths-Puffer wrestling coach Matt Brink, who was a three-time state champion himself at Fruitport High School, but had never coached a state champ in 14 years at R-P.

“It’s huge, it’s one of those things you think may never happen,” said Coach Brink, who had the extra honor of being named the state’s Division 2 Coach of the Year by the Michigan High School Wrestling Coaches Association. “Then you finally get that payout at the end, to see that kid standing at the top of the podium during the medal ceremony, it’s something special.

“Hunter came all the way up through our program. He’s definitely one of those kids that in the future we will hold up as an example – if you do these things the right way, this could be the result.”’

McCall also fulfilled a dream for his father, Jim McCall, who was a three-time state finals qualifier at Reeths-Puffer back in the day, and has been working with his son for years to help develop his strength and skills.

“It was a long time coming,” said Jim McCall, a 1987 R-P graduate. “My heart just melted. It took a lot of hard work and dedication. I was extremely happy and proud to help him meet his goals.”

“She was always there making sure his grades were there, he had good foot to eat, and he had evetything he needed – she was a big part of it,” he said.

McCall was dominant throughout the state finals. The one point he game up to Nugent in the title match was the only point he gave up, period. 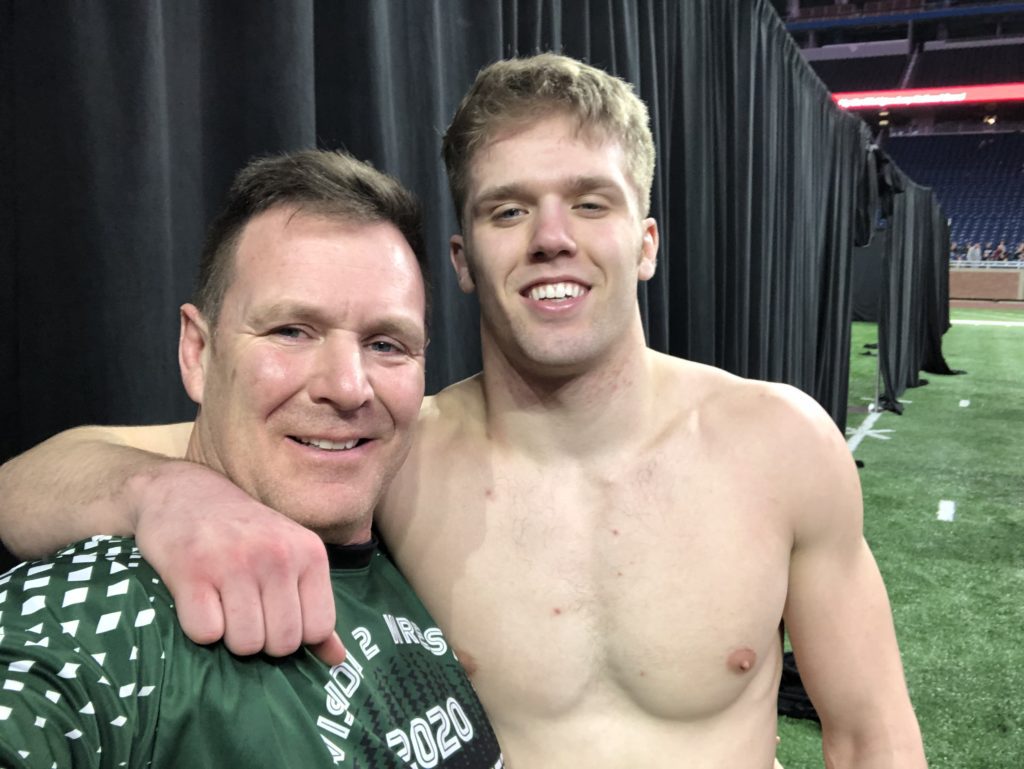 McCall with his father, Jim McCall, after the title match.

He pinned Allegan’s Zakary Foster in 19 seconds in the opening round of the tournament on Friday, then pinned Milan’s Cray Pennington in 1:03 in the quarterfinal round.

He shut down Landon Paczowski of Parma West 7-0 in the semifinals, before dismantling Nugent in the title match.

“I’ve been talking about doing this since last year when I lost, I wanted to come back this year and win it,” McCall said. “I had a really good week, did everything right leading up to state, and I felt really good wrestling.

“There are not a lot of words I can use to describe it. It’s a goal I’ve had since I first walked into the Palace (of Auburn Hills, the former site of the state finals) as a freshman. I wanted to experience it. To finally do it is unreal.”

McCall was obviously riding a wave of confidence, and Coach Brink said it showed.

McCall on the championship podium, with Coach Matt Brink standing to his right.

“It’s a payout for all the hard work he’s put into it for years and years and years. To be able to say you’re the best in the state is a great feeling. Nobody can take that away from you.”

McCall’s varsity career has been a steady progression of success, leading up to the ultimate prize.

In eighth and ninth grade he demonstrated his elite potential by winning back-to-back state championships in the Michigan Youth Wrestling Association.

Last season, as a junior, McCall won a regional championship after moving up to 215 pounds, and finished third in the state.

This season there was no slowing him down, He posted a nearly perfect 49-1 record as he reached the pinnacle of his prep career.

One great moment was when broke the previous school record of 169 wins earlier this season. He finished with a four-year record of 177-16.

“He’s accomplished a lot of firsts for the program,” Brink said. “He’s definitely the bar-setter. There is always that one kid who sets the bar a little higher, and Hunter is that kid now.”

McCall’s senior year was also special from a team perspective.

The Rockets had won conference and district championships in McCall’s first three years of high school, but had never won a GMAA City Tournament championship or a regional championship.

The city meet drought ended in January when the Rockets finally dethroned Whitehall, which had won the tournament for 13 straight years.

Last month the team broke another barrier, beating Greenville and Allendale to win the first wrestling regional championship in school history. The Rockets went on to beat Warren Woods Tower  in the Division 2 state quarterfinals, before losing to the eventual state champion, Lowell, in the semifinals.

“It really ended on a high note from a team standpoint,” McCall said. “The guys pushed themselves, and success kept coming in and coming in. We beat teams we couldn’t compete with before. It was a lot of fun.”

Several other area wrestlers also did very well at the state finals.

In Division 2, Jack Parker of Spring Lake was the state runner-up at 112 pounds, while Max Brown (13) of Whitehall and Crue Cooper (189) of Fruitport each took third.

In Division 4, Mason Cantu of Hart was the runner-up at 135 pounds. Jayden Williams of Kent City (119) finished third and Trayce Tate of Hart (112) finished fourth.

Below is a list of all area wrestlers who finished in the top eight of their weight classes and earned All-State honors: