MUSKEGON TOWNSHIP – Four years ago, Emcee Williams got his chance to play varsity basketball at Reeths-Puffer, purely out of necessity.

The previous winter, the Rockets had endured a rock-bottom 0-20 season, and head coach Lance Johnson knew his program desperately needed an infusion of talent, particularly on offense. 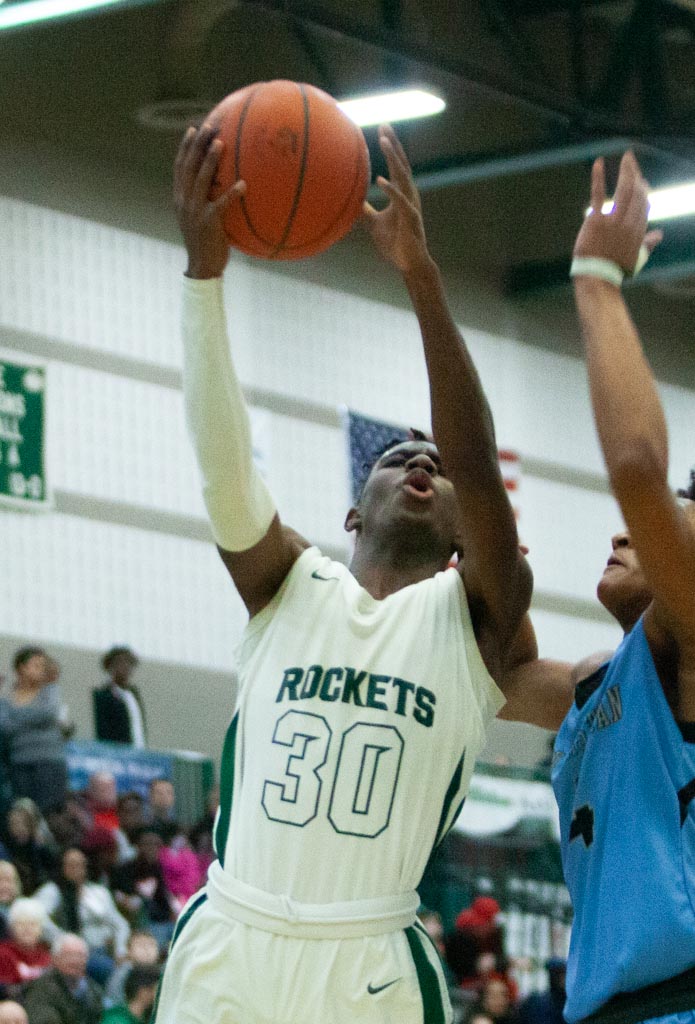 Williams goes up for the shot near the hoop. Photo/Joe Lane

Fortunately Williams, a skinny-framed kid with a wide grin and an unmatched swagger, was ready to show what he could do for the Rockets, even as an unheralded freshman.

“Emcee is a kid who does not have a lack of self-confidence,” Coach Johnson said with a laugh. “He’s a kid who’s always been known for his scoring, and that’s something we really needed.

“He’s always been really good in transition, even when he was about 130 pounds as a freshman. He just has a knack at finding ways to score one-on-one and in transition.”

It’s not a coincidence that as Williams improved, so has Reeths-Puffer’s program. Williams averaged about nine points per game as a freshman, when the team won a mere four games; 10 points as a sophomore when they improved to a respectable 10-12; and 12 points as a junior when the Rockets broke through and  finished 17-6.

This year, the Rockets have been plagued at times with inconsistency and a lack of bench depth, but they’re still a dangerous team with a 12-8 record. And for the fourth straight season, Williams is leading the team in scoring, with an average of more than 17 points per game.

“This has been Emcee’s best year shooting from three,” said Johnson, noting Williams’ career-high 29-point effort against Mona Shores on Jan. 15. “He’s also added a mid-range game, which has really made him a lot more versatile.”

The Rockets will open the Division 1 district tournament on Monday at Grand Haven against the host Bucs, a team they lost to in the second game of the season, 65-61. 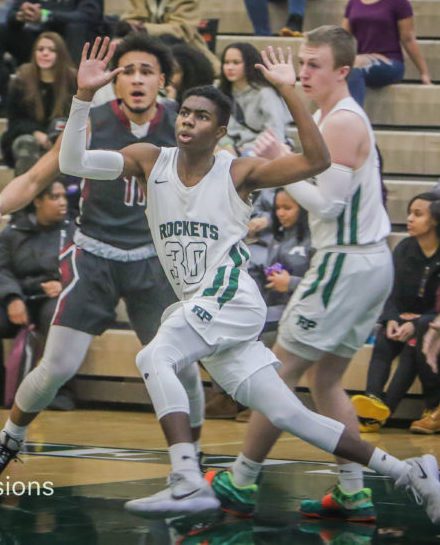 Emcee Williams cuts through the lane against Muskegon earlier this season. Photo/Joe Lane

If they manage to gain revenge against the Bucs, the Rockets will advance to face rival Mona Shores on Wednesday, with the winner advancing to Friday’s district title game.

Coaches usually have a pretty good idea of players’ potential and limits, but Williams has exceeded Johnson’s expectations, especially with the recent milestone the 6-foot-1, 155-pound guard achieved. In a game at Kenowa Hills on Feb. 25, Williams became just the fifth Reeths-Puffer player in program history to score 1,000 career points.

Williams joined an illustrious list that includes Mark Hughes, a player who later won a national championship at the University of Michigan; 1997 graduate Bryan Scott; and the talented brother duo of JR Wallace and Jerry Wallace.

“It really means something to me, because it just shows all the countless hours I’ve put into the game have been worth it,” said Williams about reaching 1,000 points. “I mean, to be one of just five at the school, it’s an amazing feeling. Before the season, coach told me I was about 300 points away, so I knew what I had to shoot for.”

Williams said he’s had a basketball in his hands since he was about 2-years-old. He said he was born into a basketball-crazy family. His mom, Sabrina Williams, played at Muskegon Heights, while his father, Tyrone Williams, starred at Detroit Southeastern.

“My dad taught me so much,” Williams said. “Everything he showed me I tried to use myself on the court. I made a lot of mistakes, but I always worked on it.”

His parents’ best advice, he said, is to keep studying hard in the classroom and keep working hard on the court. Williams said he watches a lot of film of himself, as a means to improve his game. He hopes it leads to an opportunity to play at the next level, even if it means starting at a junior college.

“Since my freshman year, I’ve improved in everything,” he said. “I’ve tried to watch a lot of film to try to see areas where I can get better, and I’ve spent a lot of hours in the gym, working on everything. Now, I’m definitely more confident and more consistent.”