GRAND HAVEN — Grand Haven did everything it needed to do in the Division 1 district semifinals at Grand Haven High School on Wednesday. 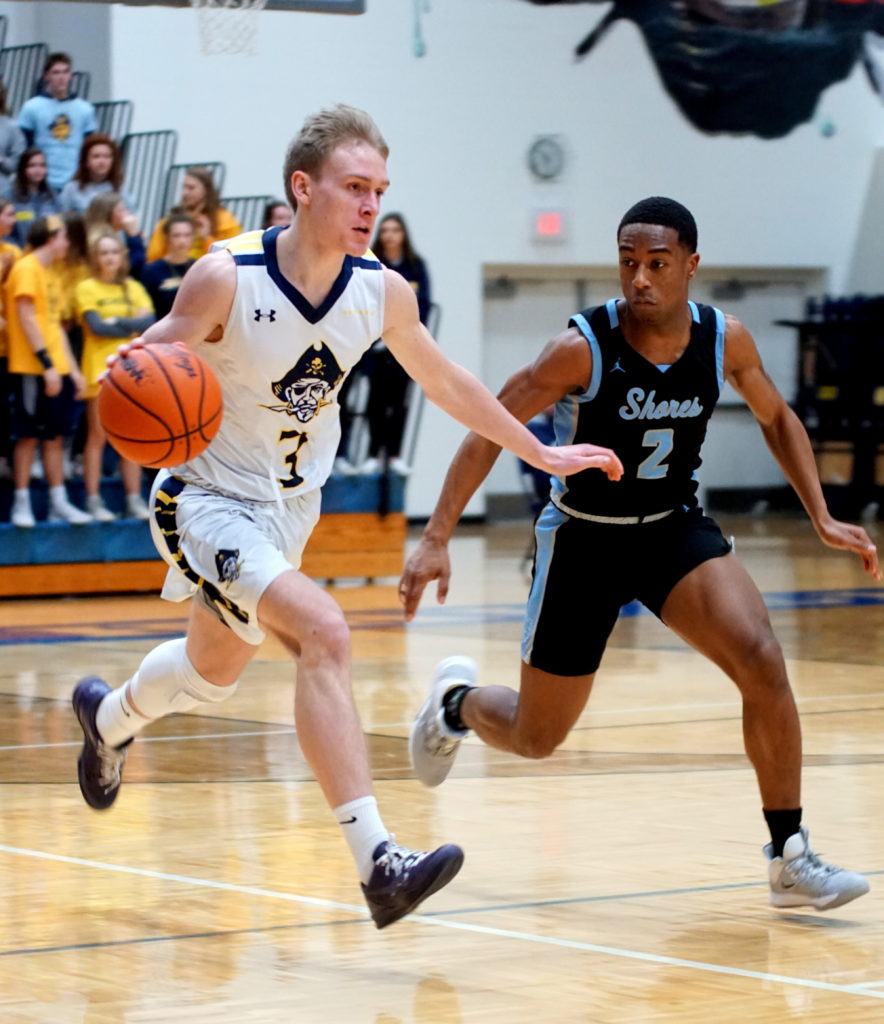 The Bucs didn’t overlook visiting Mona Shores, they kept their intensity on high throughout, locked up the Sailors defensively, and had all 15 players see game action in a blowout victory over the Sailors, 64-37.

The Bucs, now 15-7 overall, advance to face a huge challenge in Friday’s district championship game against 20-2 Muskegon, which took care of business in Wednesday’s earlier semifinal against Kenowa Hills.

The game will give Grand Haven seniors, like forward Owen Ross, a chance to end a lingering losing streak to the Big Reds in district play. Under head coach Keith Guy, Muskegon has won seven straight district championships.

“I was up on varsity my sophomore year and we lost to them,” said Ross, who led the Bucs on Wednesday with 13 points. “We want them badly, for sure. I missed playing them last year because I was out with a concussion. We’re definitely motivated.”

With the 6-foot-5 Ross patrolling the wings and paint, and significant height in the lineup, the Bucs frazzled the Sailors, whose offensive style relies heavily on drives to the basket.

Grand Haven has no starter shorter than 6-3, and even starting freshman Harrison Sorrelle, who is 6-4, was stellar in bottling up quick Sailors guards Tre Hatcher and Jaylen Hopson, and getting his hands in passing lanes. The Mona Shores backcourt duo had 13 and nine points, respectively, but no other Sailor scored more than four. 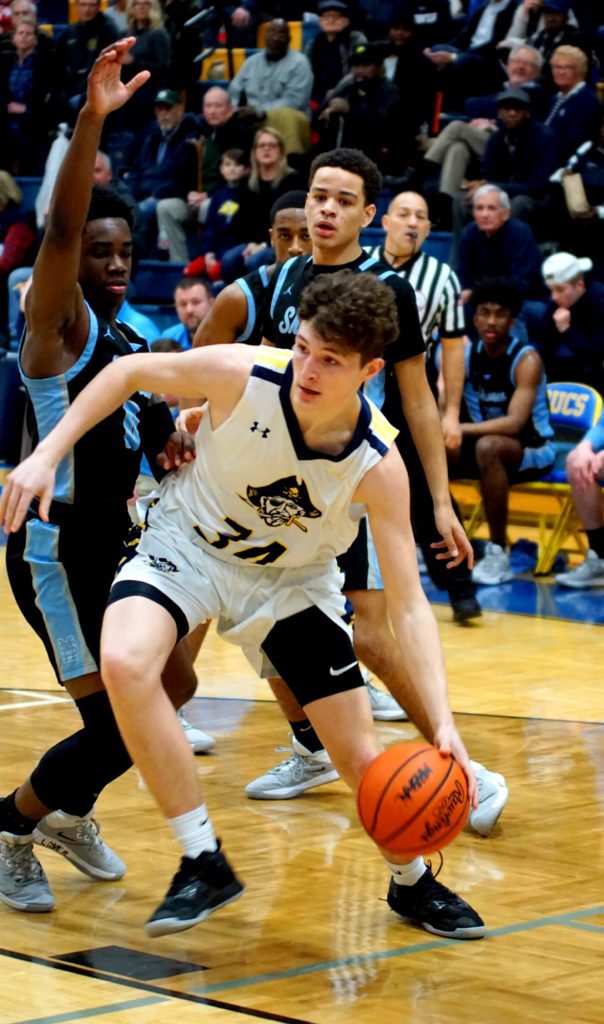 Grand Haven’s No. 34 Nick Stump makes a move at the block. Photo/Leo Valdez

“There’s a grittiness to him,” Ross said of Sorrelle. “That’s the kind of people we want on our team.”

Mona Shores hit the opening bucket of the contest and then missed its next 10 shots, going nearly seven minutes without a point as Grand Haven opened up a 16-2 lead.

“You look at video of them, you see a lot of good, athletic players who are good with the ball getting to the hoop,” said Immink. “Our focus was to stop their dribble penetration, and I think our length helped with that.”

The Sailors crept to as close as 16-9 early in the second quarter, but back-to-back 3-pointers by senior guard Drew Sinke — arguably the Bucs’ top outside shooter — seemed to open the flood gates. He helped stretch the Bucs’ lead to 24-9, and the Sailors went on another scoring drought to close out the half and trailed 30-13 at the break.

Immink started emptying his bench in the third quarter, when Grand Haven went on a 13-0 run to open up its largest lead at 47-19.

Grand Haven finished with seven 3-pointers and had 12 different players score. Sinke, along with reserves LJ Barber, Luke Deater, and Will McWatters each finished with six points.

Immink wouldn’t bite when asked about playing second fiddle to the Big Reds throughout his five-year tenure as Bucs coach, but said it will be a huge challenge to knock them off on Friday.

“Our guys will be ready – we’ll see where the chips fall,” he said. “I’m not sure our kids are any different (from previous seasons), but I do know they’ve bought into what we’re doing. They have confidence. They believe in themselves and they believe in our team. And I think that’s a great foundation and a great place to be headed into a championship game.”