GRAND HAVEN – All coaches hope that their team is playing its best basketball when tournament time rolls around. 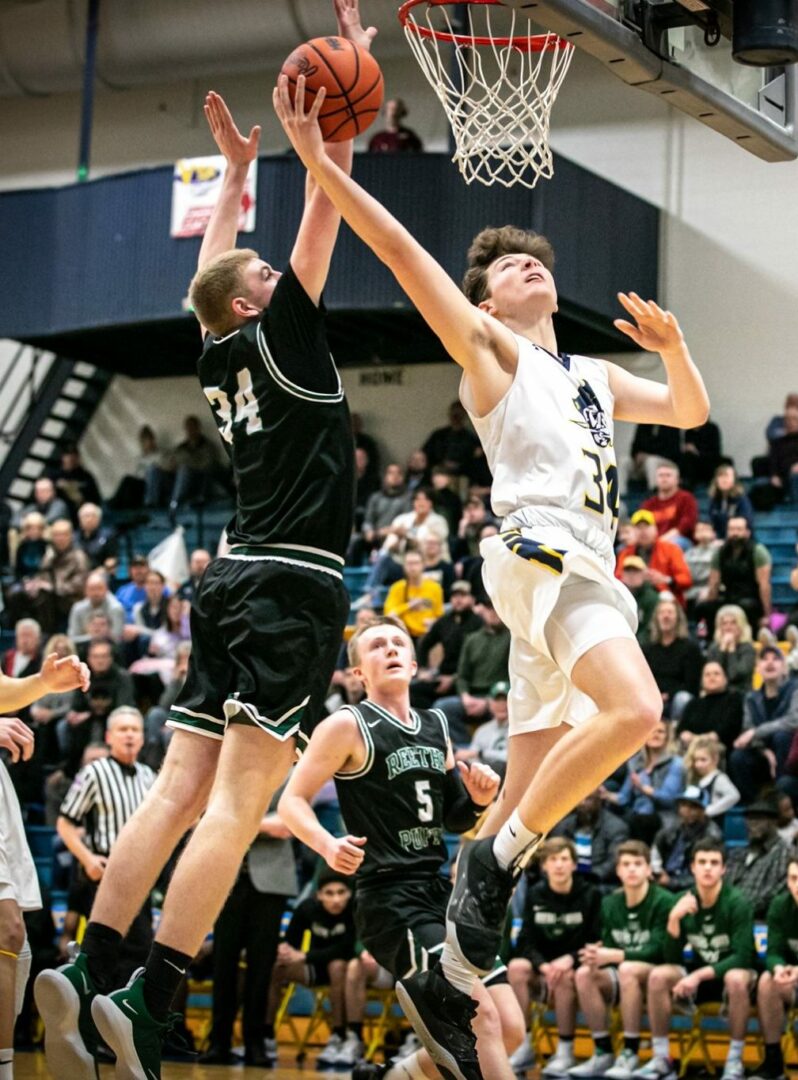 Grand Haven’s No. 32 Landon Vanbeek goes in for the layup past Kendall Smith. Photo/Tim Reilly

It’s a dream scenario that rarely becomes a reality.

But the Grand Haven boys basketball team is living proof that it can happen.

The Bucs struggled at times this season, losing five of six games at one point in January, and finishing the regular season with a 13-7 record, after opening with six straight victories.

But there were no such struggles on Monday, when Grand Haven opened up Division 1 district play with an overpowering 73-56 victory over a good Reeths-Puffer team at Grand Haven High School.

The Bucs now advance to play Mona Shores on Wednesday in the district semifinals, with the winner advancing to Friday’s championship game.

Reeths-Puffer finished the season with a 12-9 mark.

“I would say the last month we’ve been playing pretty good basketball,” said Grand Haven Coach Greg Immink. “I think the thing that got our team going was the willingness to play for the team.

“I know that sounds simple and corny, but I think the guys just finally bought in, got sick of coming out on the short end, and said ‘Hey we have to do this together.’ Since then we’ve been a different team, and we’ve been fun to watch.”

After a slow start to the game, the Bucs started clicking on all cylinders offensively, scoring from the inside and outside.

They hit 26 of 56 shots from the field, and shot over 50 percent in the second half. They were extremely hot from three-point range, sinking 12 in the game. Drew Sinke was the leaking sharpshooter with seven triples and a game-high 27 points. Owen Ross added four triples, all in the third quarter, and finished with 24 points. 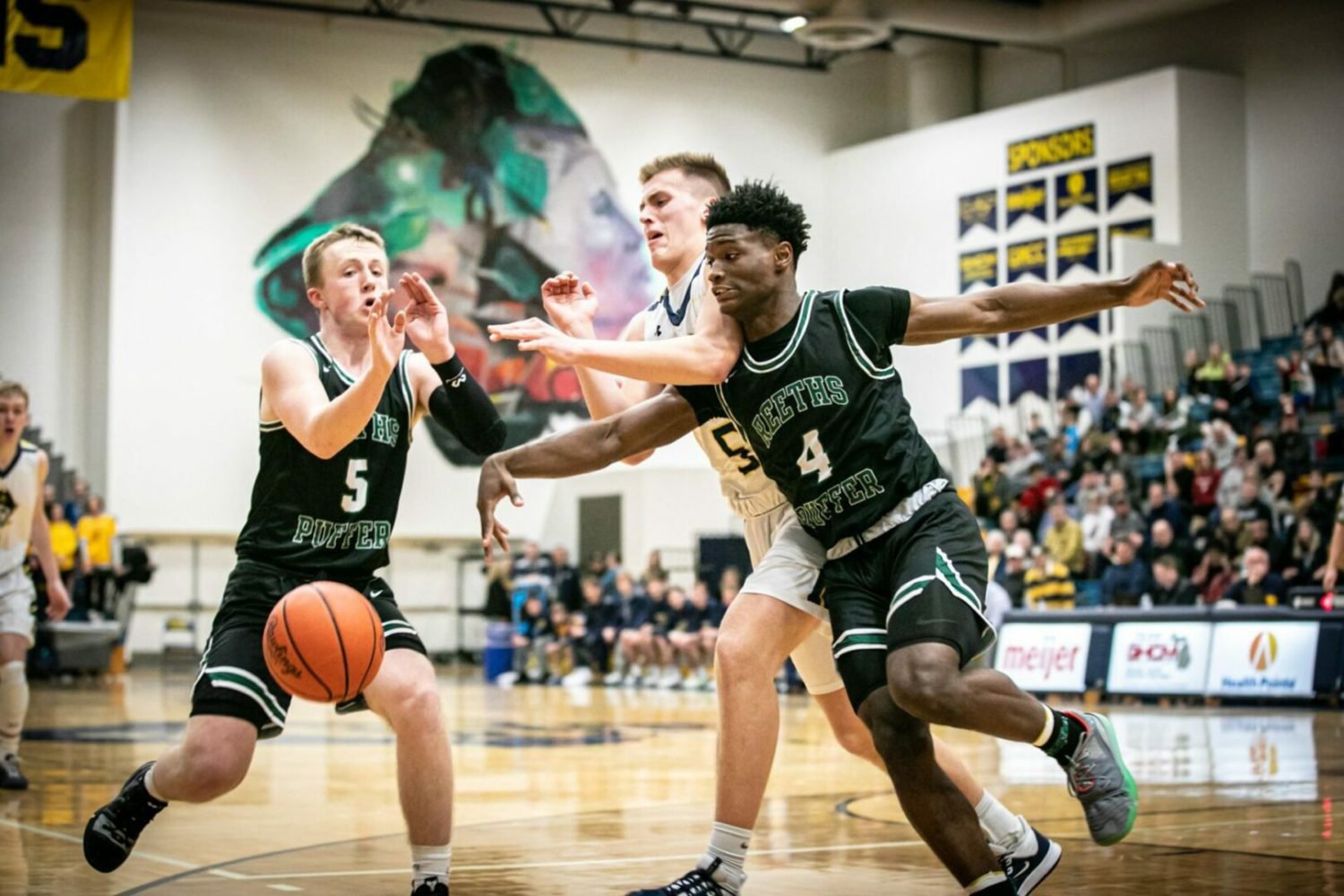 Reeths-Puffer’s No. 4 Daven Fox and No. 5 Kaleb Mitchelson battle for the loose ball against Owen Worthington. Photo/Tim Reilly

Grand Haven also extremely effective on the offensive boards, grabbing seven rebounds that led to putback points, including five in the first half.

“We were able to recoup some missed shots and get ourselves second and third opportunities,” Immink said. “Those are so big. They are backbreaking type plays for the defense, because they work so hard, get a missed shot, then still give up two points because we get the rebound. I was very pleased with our offensive rebounding.”

The contest was only close for one quarter, when Grand Haven grabbed a 14-10 lead at the first buzzer. Sinke and Owen Worthington both had one three-pointer in the first eight minutes, while three other Bucs also scored.

Grand Haven started pulling away in the second quarter, outscoring the Rockets 20-8 and taking a 58-37 halftime lead. Sinke again led the way with six points, including two triples, while four of his teammates also put up points.

The three-pointers really started to fly in the third quarter, when the Bucs outscored Reeths-Puffer 24-18 and led 58-37 heading in the fourth. Ross had a huge quarter with 17 points, which included four triples, three free throws and a two-pointer. Since had one three-pointer on the third.

Sinke tossed in three more triples in the fourth quarter as Grand Haven put the win on the books.

“I think guys are playing harder because it’s win or go home,” Sinke said after the game. “We’re young and we had some injuries, and it took a while to get going this season, but now we’re good.”

Reeths-Puffer’s No. 4 Daven Fox and No. 5 Kaleb Mitchelson battle for the loose ball against Owen Worthington. Photo/Tim Reilly

Owen Ross goes up for a shot in the lane for Grand Haven. Photo/Tim Reilly

No. 22 Bashir Neely drives in the paint for Grand Haven. Photo/Tim Reilly

Emcee Williams pulls up for a shot as Grand Haven’s No. 3 Drew Sinke goes to block the shot. Photo/Tim Reilly

Emcee Williams sets up a play for Reeths-Puffer. Photo/Tim Reilly