FRUITPORT TWP. — The Fruitport Calvary Christian girls basketball team has relied on its seniors to carry the load this season.

But when it came time to shoot the biggest free throws of the season, it was a freshman who stepped to the line. 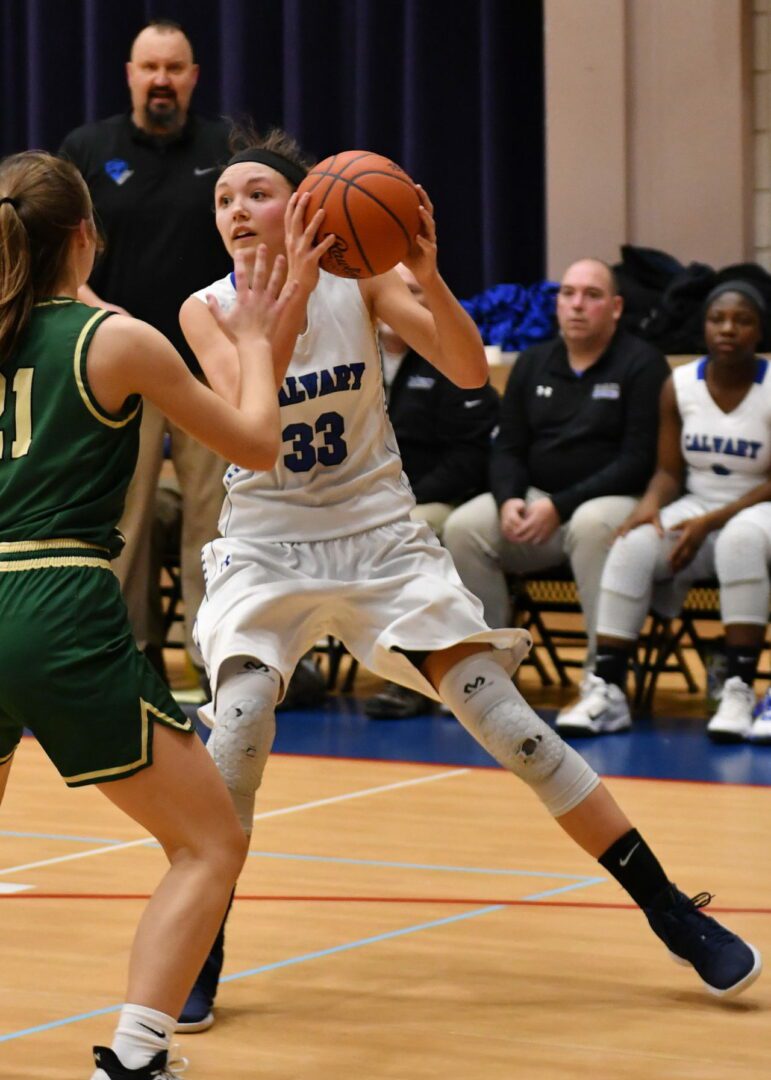 Kelsey Richards gets ready to make a move for Calvary Christian. Photo/Michael Banka

The Eagles were deadlocked with Muskegon Catholic Central, 30-30, with just 36 seconds remaining in a Division 4 district title game on Friday.

Then ninth-grader McKena Wilson calmly stepped up and sank two free throws, giving the Eagles the lead for good. She added another a few seconds later, providing the final point in her team’s 35-30 win.

“I was a little nervous,” Wilson said. “But I knew I had to knock those down. I feel like it got our team’s momentum going again. I’ve been waiting for this my whole life. I’ve really wanted to be a part of Calvary basketball.”

The win gave Calvary its seventh straight district championship, and eighth in nine seasons. The Eagles now advance to the regional round to play St. Joseph Michigan Lutheran (21-1) next Tuesday at 7 p.m. at Martin High School.

Calvary coach Brad Richards said this one title was a little extra special, because it was the final time he’ll coach one of his three daughters – Kelsey, a senior – to a district crown.

Next season he will take over the Fruitport Calvary boys team.

“It’s been 10 years, I’ve poured everything I’ve had into this school and these kids,” Coach Richards said. “It’s been a wonderful blessing to coach here.” 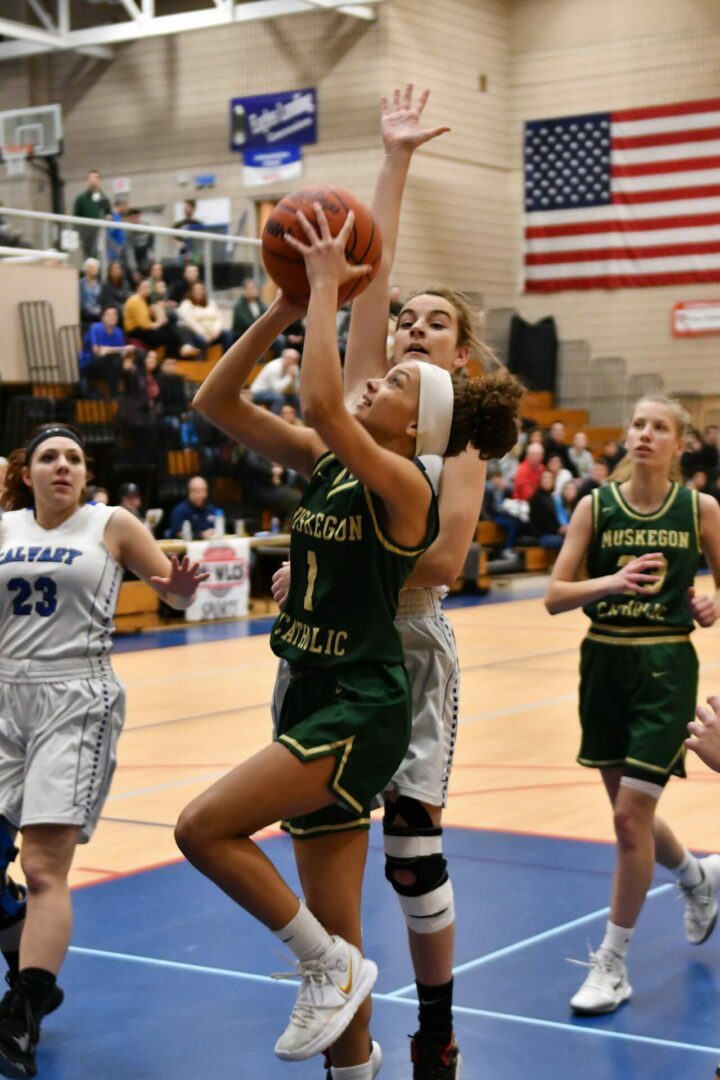 MCC’s No. 1 Jai Lyn Johnson goes up for a layup. Photo/Michael Banka

The Eagles led by double digits after one quarter, but the Crusaders fought back to take the lead heading into the fourth, before Calvary made the final comeback.

“They had us on the ropes, let’s be honest,” Coach Richards said. “I’d rather win ugly than lose pretty, especially in a game of this magnitude. It’s never easy against Muskegon Catholic because those kids fight. I couldn’t be more proud of our girls. We’ll need to play better than we did tonight, but we’re still playing.”

For Muskegon Catholic, the season came to an end with a loss to a familiar playoff foe.

“When you come that close it makes it even harder,” said MCC coach Matt Callow, whose team finished with a 6-16 record. “You feel like it was there, and if a couple of shots go in, and a couple balls bounce your way, you’re winning instead of losing.

“It’s good to have a rivalry like this. We see each other once a year, but it’s always for a trophy, it seems. They set a high standard for us and it’s helped our program.”

The game appeared headed for a lopsided finish after the first quarter, with Calvary leading 13-2 at the horn. Kelsey Richards led the early attack with eight points.

The Crusaders refused to go down quietly. Catholic opened the second quarter with a 10-2 run and outscored the Eagles 12-5 in the quarter to cut its deficit to 18-14 at halftime.

“I think we just got rid of the nerves,” Callow said of the turnaround. “We took the same shots in the first quarter as we did the next three, we just started making them because we weren’t as nervous.” 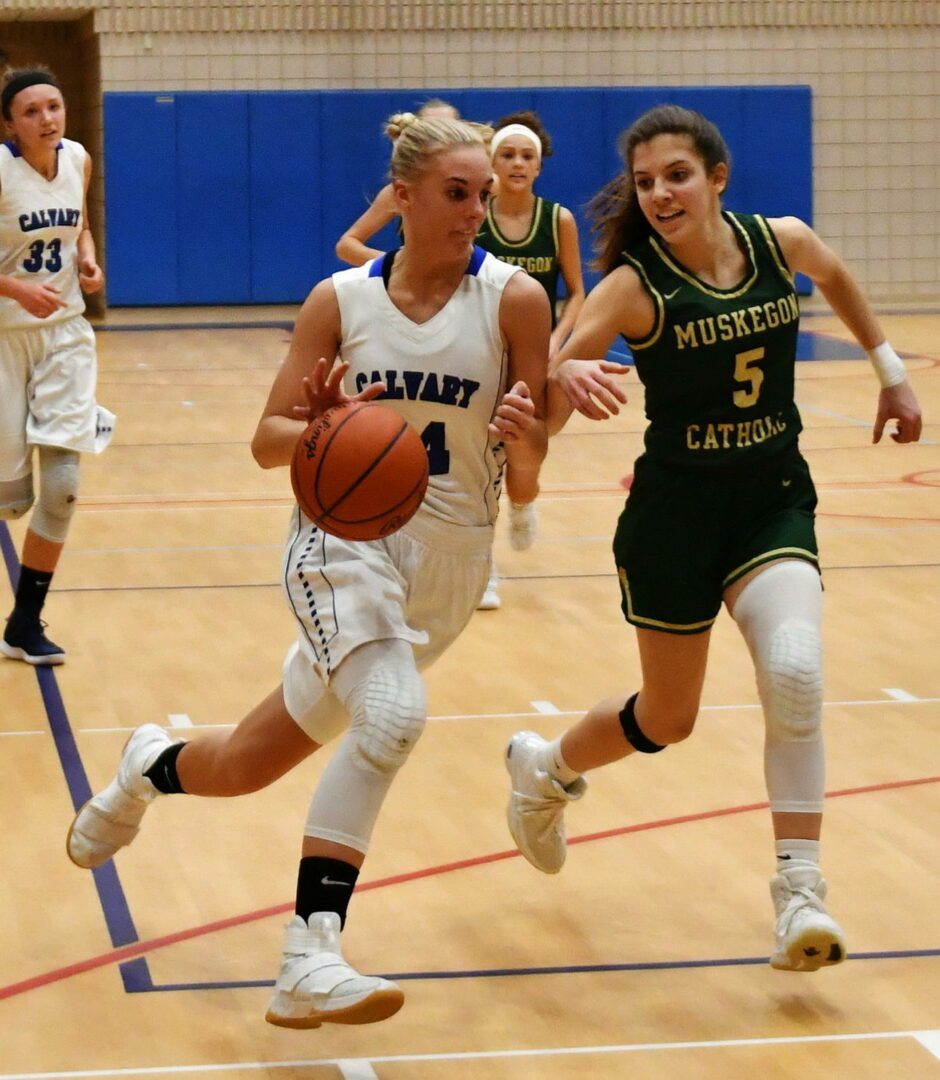 Lizzie Cammenga drives in transition as MCC’s No. 5 Kamea Sutherland tries to get back on defense. Photo/Michael Banka

Muskegon Catholic continued its run in the third quarter, scoring the first four points to draw even at 18-18. Calvary pulled back ahead 23-20 before MCC scored the final seven points of the quarter and took a 27-23 lead into the fourth.

But momentum swung back to Calvary in the fourth quarter. The Eagles opened on a 7-0 run over the first six minutes to take a 30-27 lead.

MCC’s Erin LaVigne ended the run with a long three-pointer with 1:50 to play to knot the score at 30-30.

The Crusaders got the ball back with 1:25 left, but couldn’t capitalize. Wilson, the freshman hero of the game, pulled down a rebound and was fouled with 36.5 seconds remaining.

After her two go-ahead free throws, a loose ball situation led to a questionable jump ball call, and the possession arrow favored Calvary.

Lizzie Cammenga hit a pair of free throws to stretch the lead to 34-30 with 18.3 seconds left. Wilson tacked on a final free throw with 5.9 seconds remaining to bring the score to 35-30.

Lizzie Cammenga drives in transition as MCC’s No. 5 Kamea Sutherland tries to get back on defense. Photo/Michael Banka

Calvary Christian’s Kelsey Richards goes up for a shot in the paint. Michael Banka

Cate Anhalt drives to the basket against MCC’s No 21 Claire LaVigne. Photo/Michael Banka

Lizzie Cammenga reaches for a rebound in front of MCC’s No. 12 Hazel Rodriguez