NORTON SHORES – The Muskegon girls basketball team had a score to settle with Mona Shores. 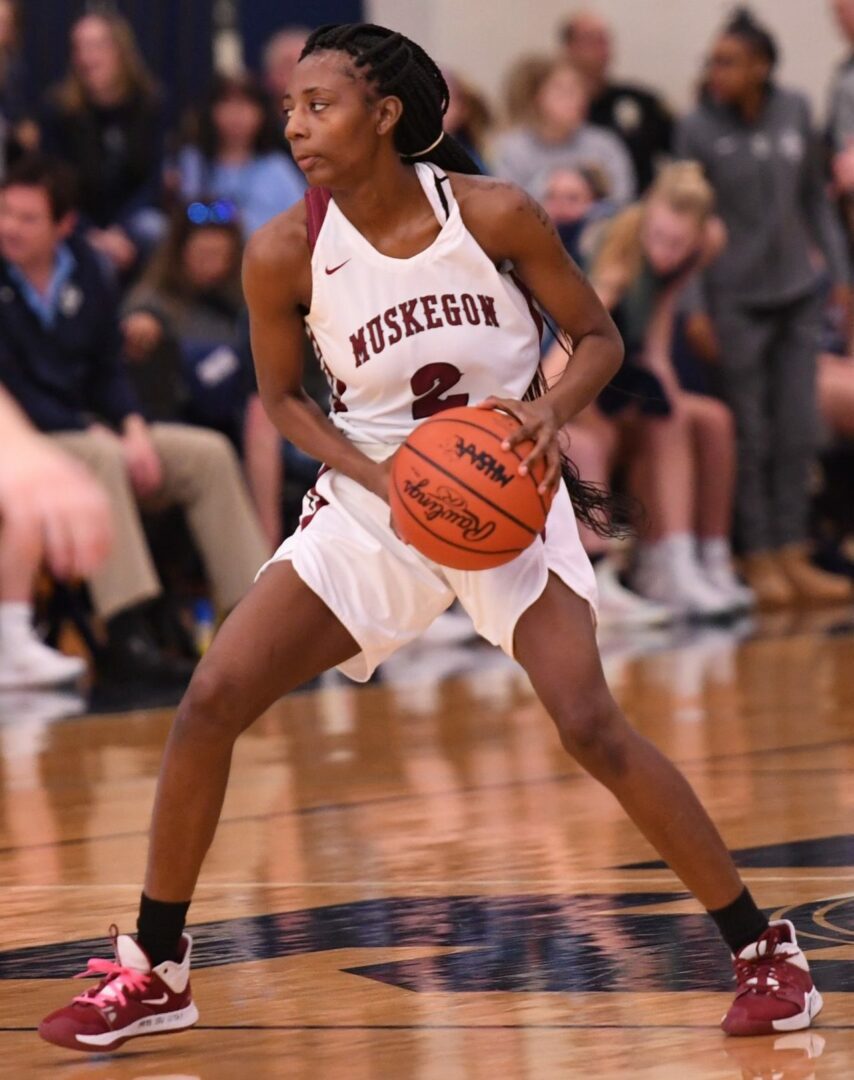 DeShonna Day looks to make a pass after just crossing half court for Muskegon. Photo/Craig Smith

Just over a week ago, the Sailors upset the Big Reds in the last regular season meeting between the teams, costing Muskegon a share of the O-K Black Conference title.

They met for the third time on Wednesday, in the semifinals of the Division 1 district tournament at Mona Shores High School.

The Big Reds weren’t able to get even with a lot of offense. They missed a lot of shots and turned the ball over too much.

So they made up for that with a stifling defense, which kept the Sailors from driving to the basket very often and getting good shots. That allowed the Big Reds to overcome a one-point halftime deficit and pick up 39-27 victory and a berth in Friday’s district title game.

“They stole the conference from us, so this was something my ladies and myself were looking forward to, to play our best game and come out on top,” said first-year Muskegon Coach Paris Thomas, whose team improved to 15-7.“It’s playoff time and everybody is bringing out their A game.”

The Big Reds were icy cold offensively at the start of the contest, missing their first seven shots from the floor, allowing the Sailors to pull out to a 7-0 lead.

But Muskegon’s Kailyn Nash hit a triple and two layups over the rest of the quarter, and the game was tied 7-7 at the first buzzer. 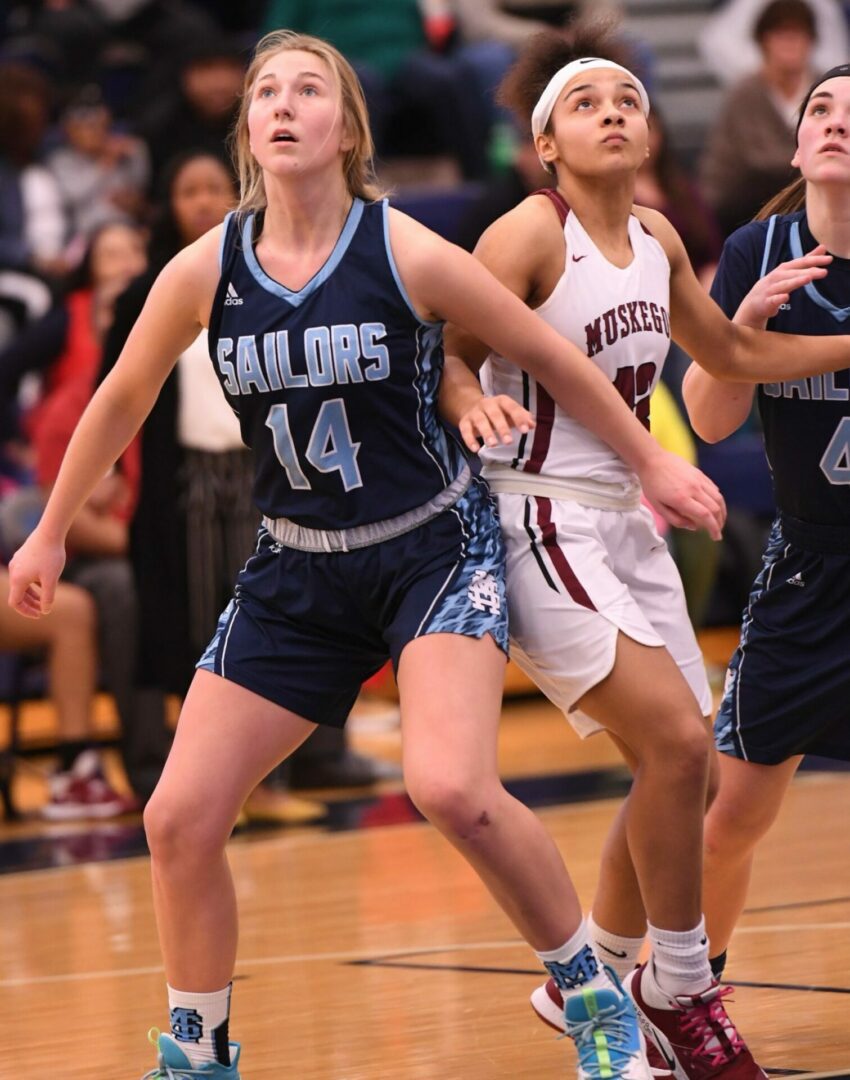 Riley Rosenthal gets in front of Muskegon’s No. 12 McKynna Sims. Photo/Craig Smith

The Big Reds took a 13-8 lead early in the second quarter, with a layup by Makiya Sones and two buckets from Diamond Sawyer.  But Mona Shores finished the quarter with a 7-2 run, powered by a steal and layup by Olivia Sobczak, a triple by Sobczak and a layup by Riley Rosenthal, and had a 15-14 lead at halftime.

Mona Shores led 21-20 with 2:45 left in the third, then Muskegon finished the quarter with an 8-0 run, which was capped by a 3-pointer by Jakayla Anderson with two seconds left on the clock.

The Big Reds’ defense really started to make a difference in the third quarter. They had two blocked shots, a steal, and a turnover caused by their press, and held Mona Shores to only two baskets and six points.

There were a lot of fouls and free throws in the final eight minutes, and very few field goal attempts. The Big Reds nailed down the victory by hitting five of eight from the line, while Mona Shores went 1-for-7.

Muskegon’s Anderson went down with a painful leg injury toward the end of the game, but Coach Thomas said after the game that it wasn’t her knee, and there was hope that she could return for Friday’s district title game. 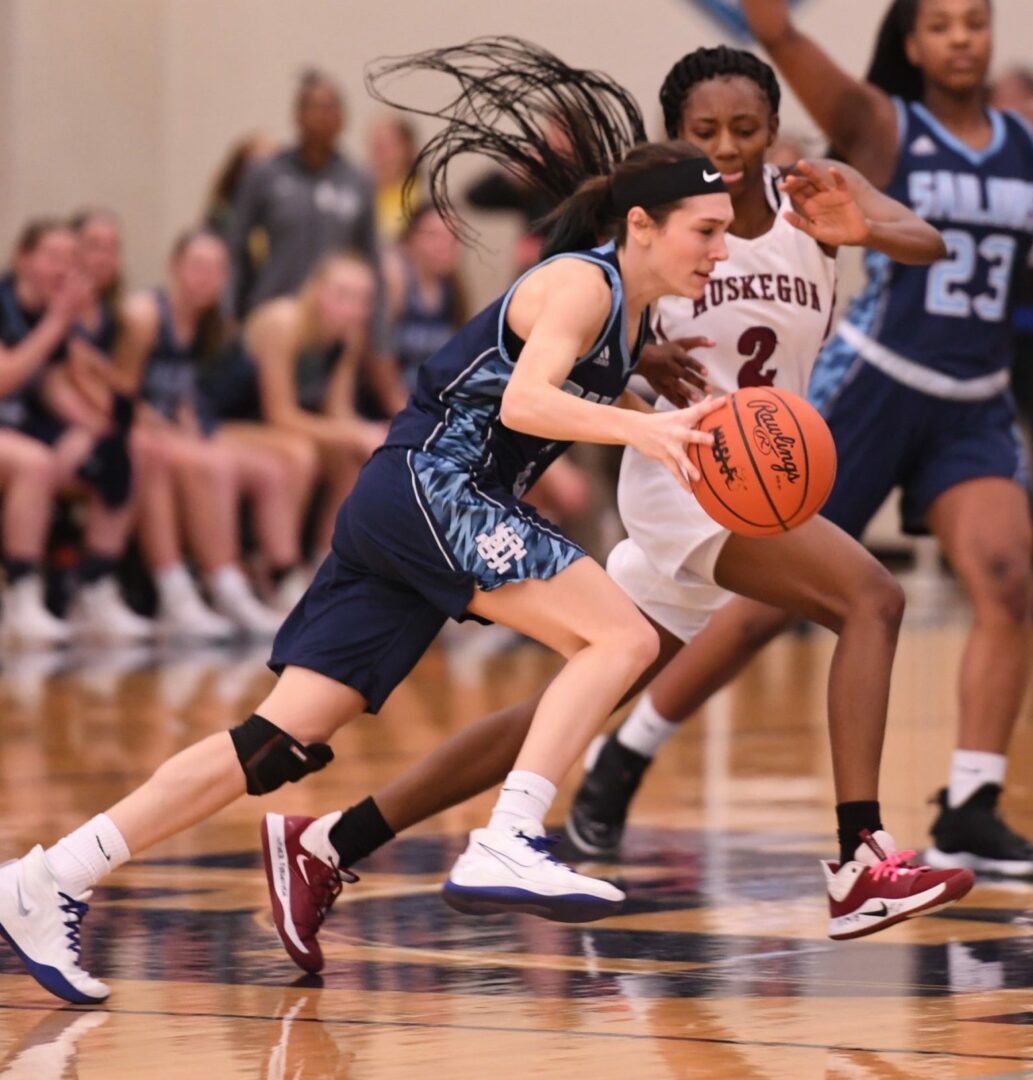 Muskegon totaled 47 field goal attempts in the game, compared to only 35 for Mona Shores. The Sailors had a 32-29 rebounding edge, but Thomas said that was a big improvement from the last time the two teams met.

“We were big on the rebounds,” the coach said. “In the last game they outrebounded us and we had 24 turnovers, which was double the number we had the first time we played them. Taking care of the ball, playing tough defense, and boxing out and limiting second chances was the difference.”

Nash paced Muskegon with 13 points while Anderson and Sawyer both scored nine.

Thomas gave a big nod to Sawyer, who came off the bench and played a great all-around game.

“She played great defense – I think she had about seven rebounds and five blocks,” the coach said. “She really played tough tonight.”

The Sailors finished the season with an 11-10 record.

DeShonna Day takes a shot from a tough angle for Muskegon. Photo/Craig Smith

Makiye Sones pushes the ball up court past Mona Shores’ No. 10 Olivia Sobczak