KENTWOOD – The Western Michigan Christian soccer team is returning to the state finals for the first time since 2011.

The Warriors’ offense came to life late in the first half on Wednesday night, and WMC went on to earn a 2-0 Division 4 state semifinal win over Dansville at East Kentwood Middle School. 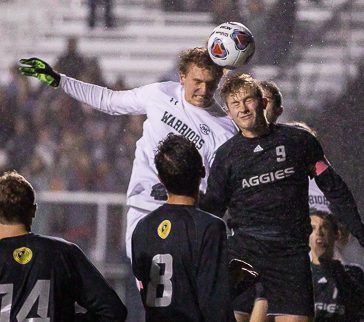 Brandon Fles gets up for head ball for WMC. Photo/Randy Riksen

WMC improves to 18-2-3 on the season and advances to the state championship game on Saturday in Novi at 3 p.m. The Warriors will face Grosse Pointe Woods, which defeated Clarkston Everest Collegiate 5-0 in the other semifinal.

“These guys are great, and I’m really proud of them and how hard they played,” Warriors coach David Hulings said. “We’ve had great teams for the past three or four years, and to finally get through this thing, it’s just a sweet time because it’s been awhile.”

The teams played tentatively in the early stages of the game, before Dansville started applying offensive pressure with about 16 minutes left in the first half.

In a span of three minutes, the Aggies kept the ball in the Warriors’ zone and had four corner kicks, but couldn’t manage a shot on goal.

WMC stole the momentum after that spurt, although the game remained tied at 0-0 at halftime.

The Warriors had a pair of scoring chances thwarted early in the second half, with the best coming at about the 13 minute mark. 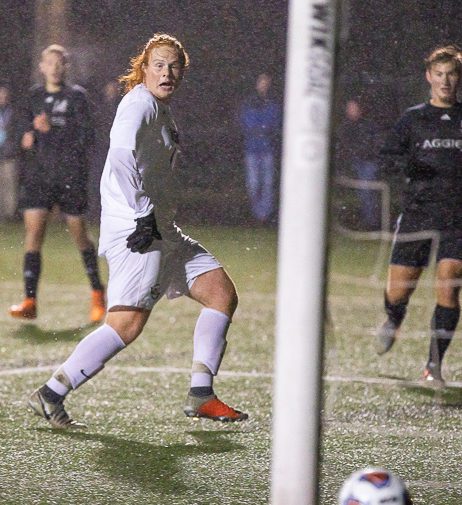 Brevin Byrne eyes his shot that put WMC up 1-0 over Dansville. Photo/Randy Riksen

WMC’s Charlie Alfree took a long pass, beat the Aggies goalie to a loose ball and had an empty net, but his shot was blocked by defender Jayden Matthew.

With the shots mounting, WMC continued to mount pressure, and with 22:10 left in the game, Ashton Leffring centered a pass to Brevin Byrne, whose shot hit the left post and bounded into the net, giving the Warriors a 1-0 lead.

“We talked at halftime and said, ‘Just keep doing what you’re doing,’” Hulings said. “We told them to just do more of it and do it better. If we kept attacking, it was only a matter of time.

“In the first half we didn’t have enough guys in the box. After halftime we committed to the attack, and every time I looked up we had three or four guys in front of their net.”

Michael Masumpa matched Byrne’s goal just 7:24 later, picking up a loose ball and knocking it in off the left post for a 2-0 WMC lead.

The Warriors finished the game with a 10-3 shot advantage, and goalie Jameson Goorman earned his fifth shutout of the postseason.

Nick Moser winds up to send the ball deep for WMC. Photo/Randy Riksen

WMC’s Michael Masumpa celebrates his goal that put WMC up 2-0 while No. 22 Jake Betten celebrates at midfield. Photo/Randy Riksen