MUSKEGON – Jameson Goorman is only human, and he finally gave up a goal in the state tournament.

But Western Michigan Christian’s senior goalkeeper demonstrated that a little adversity can’t throw him off his game, particularly at the most crucial moments. 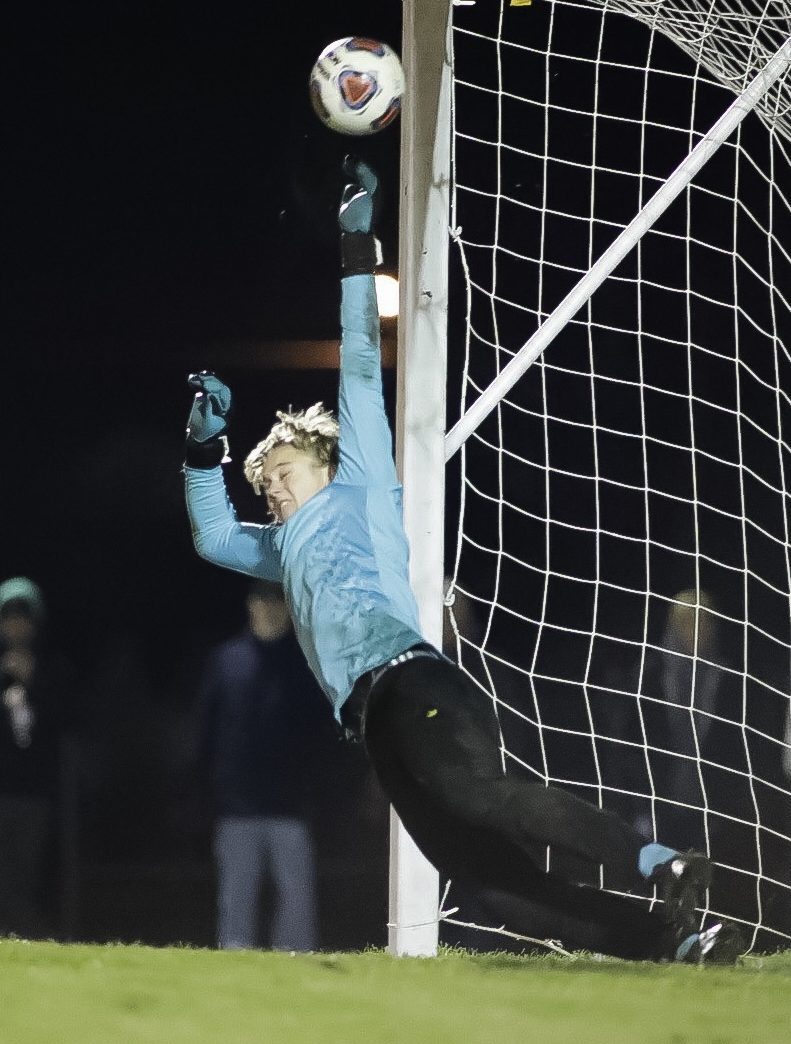 Goorman had posted four straight shutouts coming into Thursday’s Division 4 regional championship game against Calvin Christian, the top-ranked team in the state. Three came in the district tournament, and the other was on Tuesday in the regional semifinals against North Muskegon

That streak finally ended in the first half on Thursday when Calvin Christian scored on a shot from close range and took the lead.

But Goorman was at his best when the tense game was on the line. He made two huge saves early in the second overtime to keep the Warriors alive, then made two more in the overtime shootout to seal WMC’s thrilling 2-1 victory in front of a big crowd on its home field.

His biggest save came on the final shot of the shootout, when Calvin Christian’s Andrew Gruppen sent a high shot at Goorman, who leaped and tipped it over the next to nail down the win.

“He was looking like he was going right, then he swung his hips over so I just dove that way and tipped it over the bar,” Goorman said moments after his team accepted the regional championship trophy.

WMC, now 17-2-3 on the season, advances to next Wednesday’s Division 4 state semifinals at East Kentwood Middle School against Danville or Kalamazoo Hackett, who will play in a regional championship game on Friday.

The winner of the semifinal will advance to the state championship game a week from Saturday. 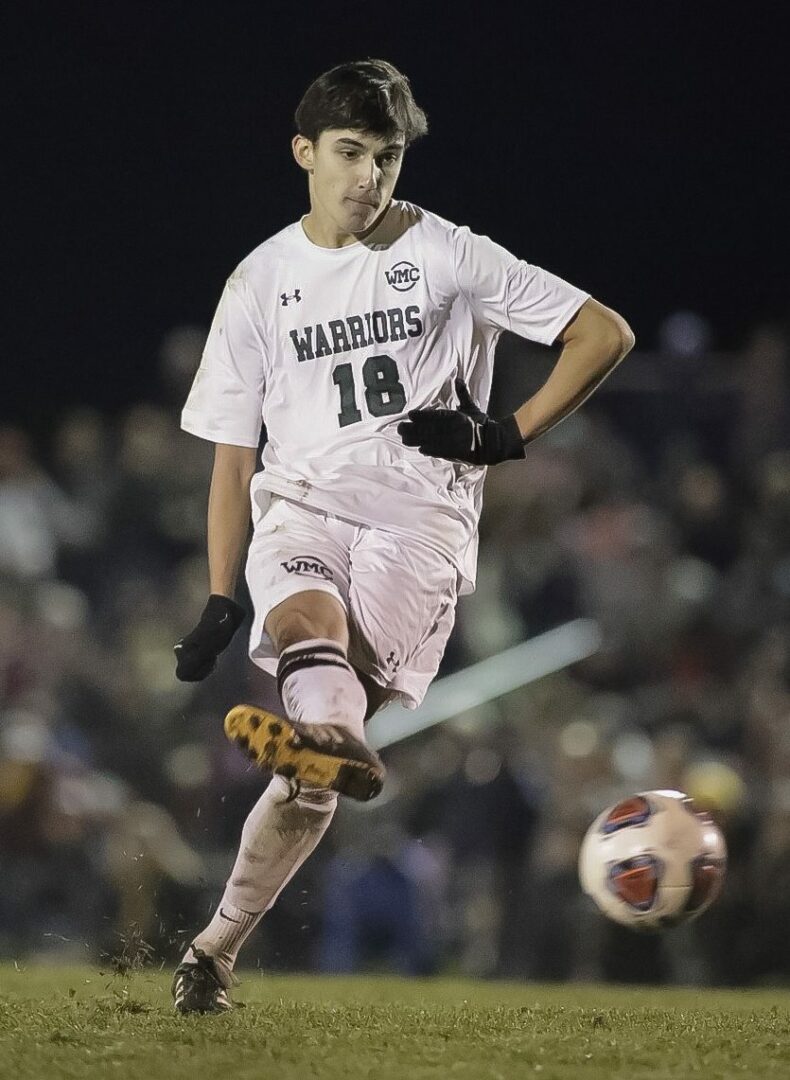 WMC Coach David Hulings, whose team is returning to the state semifinals for the first time in four years, was emotional about the victory and his team’s determination to fight from behind to get the win.

“These were two really good teams,” Hulings said. “Those guys deserve to be No. 1, and you have to beat No. 1 to get there, so that’s where we are.

“I certainly am excited. This team has worked so hard and has really come together. I’m so proud of them. They’re just good kids.”

The Warriors’ amazing tournament shutout streak came to an end about 13 minutes into the first half, when Calvin Christian’s Matt Muller put a high shot into the net from close range.

Meanwhile the Warriors struggled to penetrate Calvin’s tough defense to find quality shots. The Squires had a 4-2 shot advantage in the first half, and went into halftime with the 1-0 edge.

But WMC kept working to create scoring opportunities in the second half, and finally tied the game 16 minutes in when Brevin Byrne got a low dribbling shot past the Calvin goalie and into the net, tying the game 1-1.

“This team was very organized defensively against us,” Hulings said. “They scored 88 goals during the season and only gave up eight. The goal we scored was just a hard-working goal, nothing finesse about it, and we’re usually a finesse team.”

The Warriors had a 4-3 shot advantage in the second half, but nobody managed to score again, and the contest went to overtime. 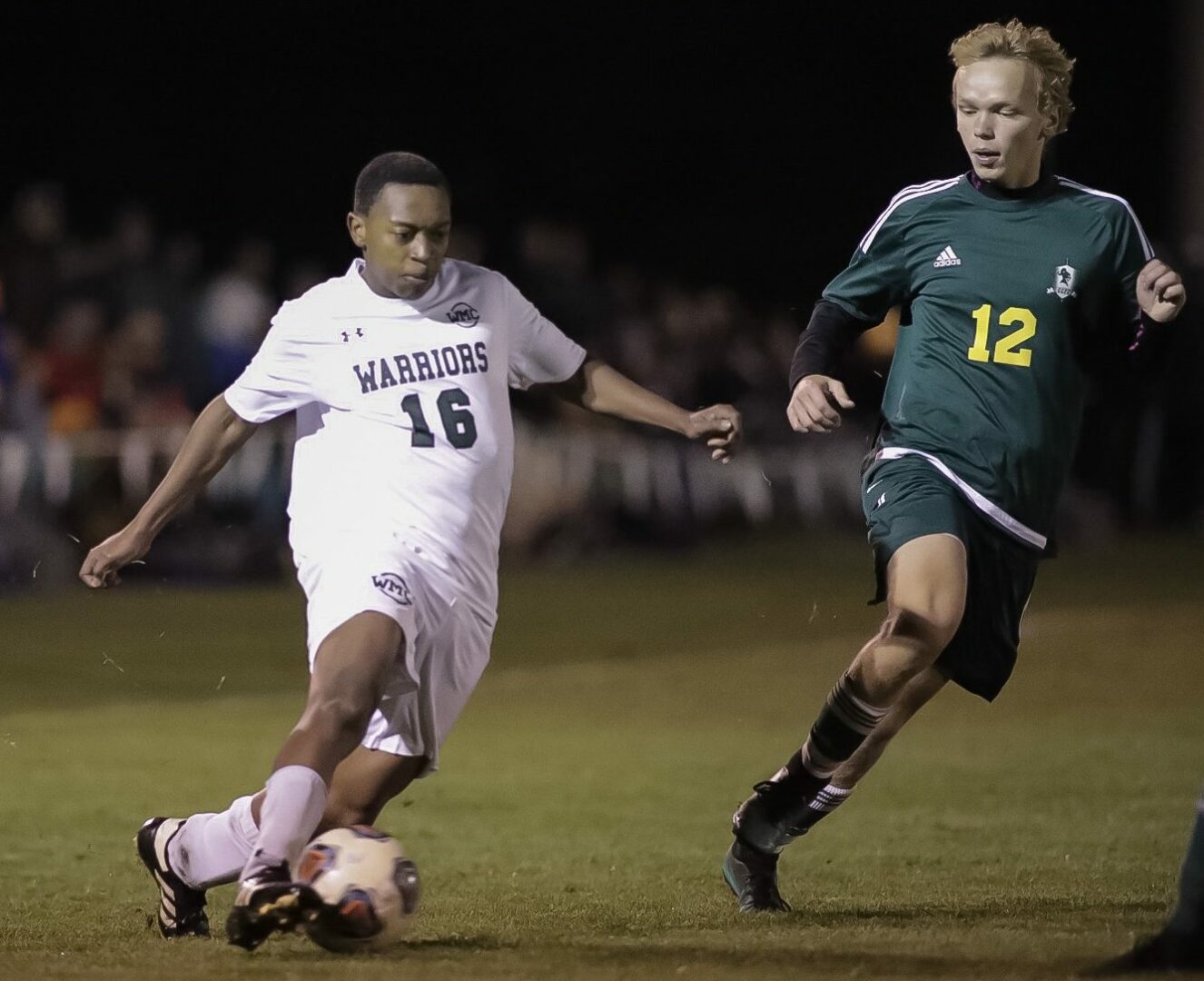 WMC’s No. 16 Michael Masumpa makes a cut with the ball. Photo/Randy Risen

The two 10-minute overtime periods were also scoreless, but Calvin Christian came very close to breaking the tie twice with about four minutes left in the second OT. Goorman came up big on both shots, diving hard to his left on the first shot to make a sprawling save, then leaping eight seconds later to stop a high shot that was headed for the net.

The game came down to an overtime shootout, with up to five players from each team going 1-on-1 with the opposing goalie from close range.

All four Warriors who got the chance to shoot found the mark – Brandon Fles, Byrne, Charlie Alfree and Isaac VanHoeven. Calvin’s first and third shooters scored, but Goorman stopped Jake DeYoung, the second shooter, and WMC went into the fifth and final round with a 4-3 edge in the shootout.

If Calvin’s Andrew Gruppen scored, the shootout would have continued. If Goorman could stop him, the game was over.

The shot was high, Goorman calmly leaped and tipped it over the net, and hundreds of WMC students swarmed the field to celebrate the dramatic victory with the team.

The shootout victory was a sweet turn of events for the Warriors, who were eliminated from the state tournament three of the past four years in shootout games.

“We practiced those so many times this year, so I was glad we went to the shootout because I wanted to see if the way I changed we practice them actually worked,” Hulings said. “(Goorman) would have been our fifth shooter. I think he made the save because he didn’t want to shoot!”

Charlie Alfree jumps over the Calvin Christian goalie on a close play at the net. Photo/Randy Riksen

WMC goalkeeper Jameson Goorman and No. 10 Brandon Fless jump in the air to celebrate their team’s regional title while No. 5 Charlie Alfree gets ready to jump into the fray. Photo/Randy Riksen