SPRING LAKE – Throughout a first half that featured stinging rain and blustery winds, Grand Rapids Catholic Central managed to turn Spring Lake into a passing team.

That wasn’t a good thing for the Lakers, because they rely on the run for success and it wasn’t working.

The Cougars’ aggressive run defense, combined with the big-play ability of quarterback Joseph Silveri, allowed them to post an impressive 42-14 victory at Grabinski Field on Friday.

For a Lakers team that prides itself on establishing a dominant run game, it simply wasn’t in the cards against a squad that reached last season’s Division 4 state semifinals. The Lakers totaled just 194 yards, with 150 coming in the second half.

“A little disappointing we couldn’t establish the run better,” said Spring Lake coach Dan Start, whose squad fell to 4-3 overall and 3-2 in the O-K Blue Conference, and missed a chance to move into a tie with GRCC for the conference lead. “They were really aggressive and came out flying around, and it took us awhile to find ways to move the football.” 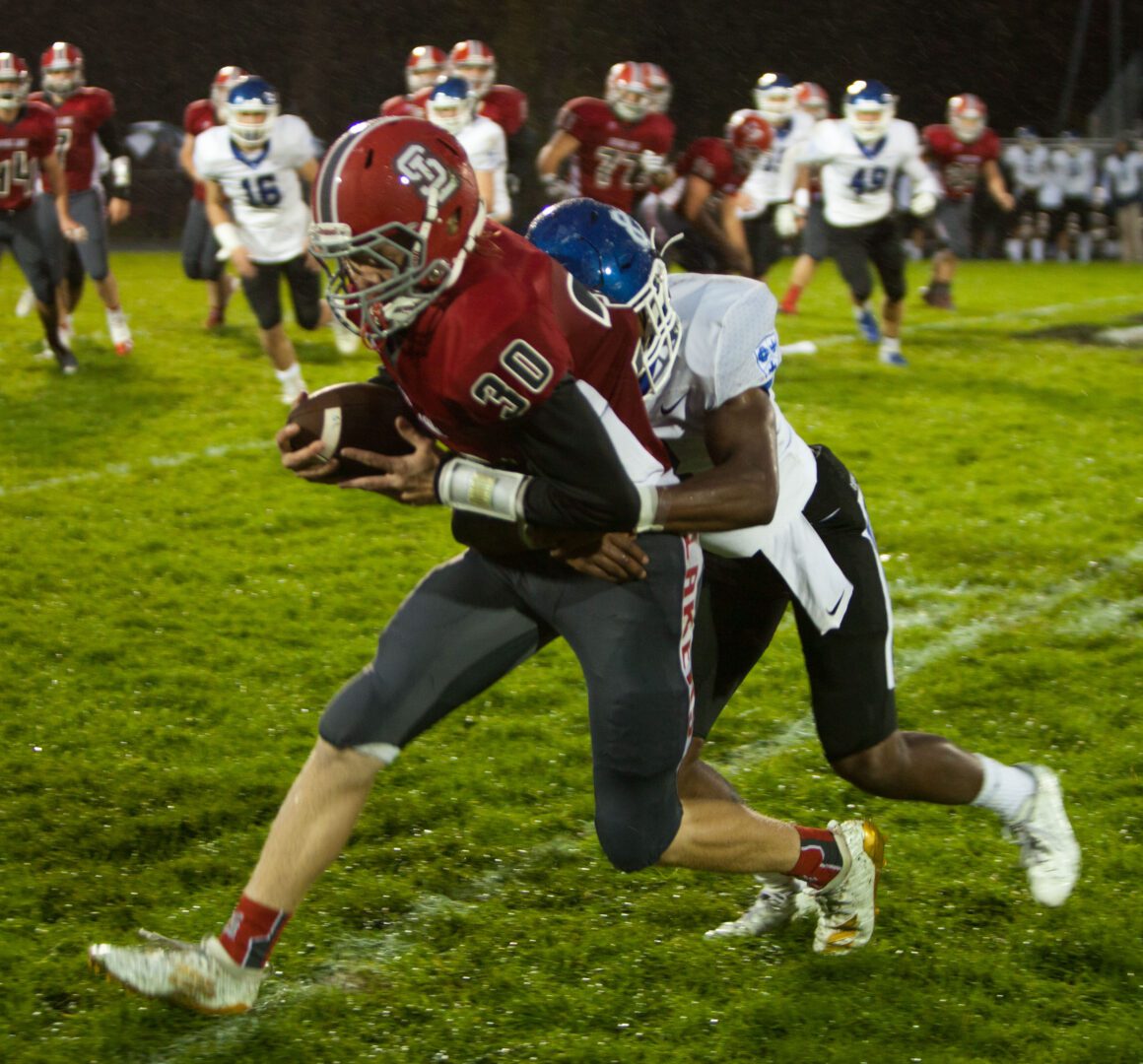 The Cougars struck early on a dazzling 70-yard scamper up the sideline by Silveri on their first possession, but the Lakers held them in check for a good chunk of the remainder of the first half.

But the Cougars needed just a little chunk of time near the end of the second quarter to put the game out of reach.

Silveri, who is just a sophomore, saw tight end Ethan Lott drift uncovered past midfield, and connected with the senior for a 46-yard completion. Two plays later, Silveri snuck into the end zone from a yard out to give Catholic Central a 14-0 advantage.

A three-and-out from the Lakers and a short punt put the Cougars right back in business with 2:11 remaining in the half. This time Silveri connected twice to his favorite target, junior Jace Williams, for 39 and 6 yards, with the last pass being a touchdown.

Williams is being recruited by Michigan State University and several other Division 1 programs.

Spring Lake had just 44 yards at the half, with 28 coming on three pass completions to senior Aidan Carlson. 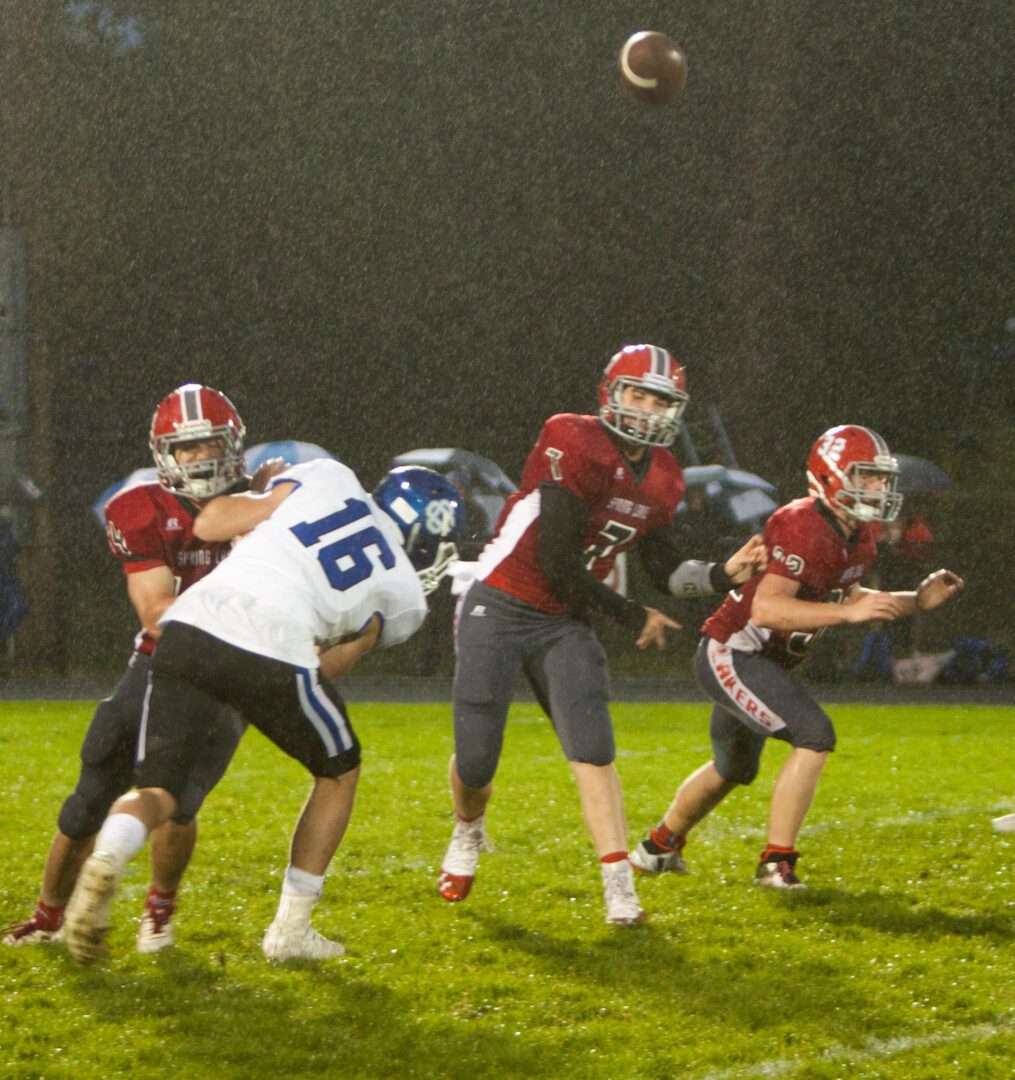 “It was tough sledding,” Start said. “There’s a reason why they’ve won so many games the last few years.”

GRCC’s 21-0 halftime lead swelled early in the third quarter. First a big 34-yard run by physical junior Nicholas Hollern helped set up his own 6-yard touchdown run with 9:51 left on the clock.

On the Panthers’ next series, senior Shawn Wells showed great burst on a 43-yard touchdown run, giving the visitors a 35-0 lead and triggering a running clock.

The mercy rule only lasted about 20 seconds. On the first play of the Lakers’ next possession, the Cougars bit badly on a jet sweep fake, and Laker quarterback Zach Keyser was 10 yards upfield before Catholic Central’s defense realized he had the ball. Keyser kept going untouched for a 65-yard touchdown.

Keyser, a senior, led the Lakers with 91 yards on just five carries.

Another fake and long keeper by Keyser paved the way for another Lakers’ score early in the fourth, a 3-yard run by Steve Ready, making it a 35-14 contest.

The Cougars then rumbled 51 yards in just six plays, scoring on Hollern’s 15-yard run for the game’s final points with 7:32 left.

Silveri finished with 121 yards rushing and 188 yards passing for GRCC, which improved to 6-1 overall and 4-0 in league play.

Start said he’ll give his squad a day to lick its wounds, but the Lakers will need to regroup quickly. They need wins against both Allendale and Holland Christian in the last two weeks of the regular season to earn an automatic berth into the playoffs.