MUSKEGON TOWNSHIP – In a game both teams desperately needed to win, Mother Nature ended up playing a big role.

Competing in a steady rain, Reeths-Puffer and Fruitport both struggled to move the ball and had to count on the other team’s mistakes to have a shot at victory.

Reeths-Puffer was the team that took advantage of most of the mistakes, leading to a 22-0 win over the rival Trojans on Friday in an O-K Black Conference game.

The Rockets kept their playoff hopes alive for another week, improving to 4-3 on the season. They will host Kenowa Hills next Friday before closing the regular season with a daunting task against powerful Muskegon.

“Mother Nature didn’t cooperate at all tonight, but that’s what you’re going to get every once in a while when you get to October and then into November, if we can get our program to that level,” said Reeths-Puffer coach Matt Bird. 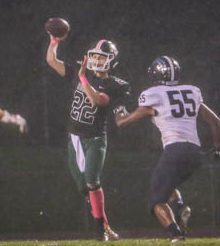 “We had different kids stepping up throughout the week and that is huge to see,” Bird added. “It was a field position type of game, and we trusted each other as a team.”

The teams combined to punt the ball 13 times throughout the contest. The Rockets were the first to kick the ball away on their first drive.

Fruitport tried to punt next, but a botched a snap inside their own five-yard line, resulting in a safety and a 2-0 Reeths-Puffer lead with 8:08 left in the first quarter.

The Rockets took advantage of another muffed punt midway through the second quarter and got the ball at the Fruitport 15-yard line. Reeths-Puffer quarterback Evan Moskwa scored on a 1-yard touchdown run with 5:46 left in the first half to give the Rockets a 9-0 halftime lead.

Both teams failed to score during the third quarter. The Rockets finally ended the drought with 11:21 left in the fourth quarter when Daven Fox ran in a six-yard touchdown, capping a seven-play, 50-yard drive.

The Rockets had four interceptions as a team, all in the second half, and allowed only 66 yards of total offense.

Moskwa paced Reeths-Puffer with 136 yards passing, 58 yards rushing and one touchdown, while Fox had two rushing touchdowns and totaled 39 yards on the ground.

The Trojans fell to 3-4 on the season and will look to bounce back next Friday against Coopersville.

“Our defense played well but our offense made too many mistakes,” said Fruitport coach Nate Smith. “All we can do is gett ready for Coopersville next week.”