FREMONT – The Lakes 8 Conference was loaded with talented soccer teams this fall, and that became even clearer on Saturday.

Orchard View, which finished third in the Lakes 8 this season, defeated Fremont, the CSAA Gold Division co-champion, 2-1 in a Division 3 district championship game on the Packers’ home field. 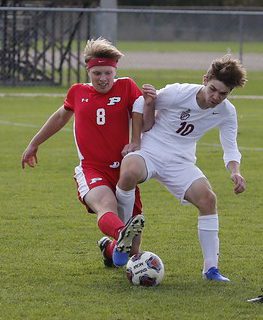 Logan Woods fights for the ball against Fremont’s No. 8 Jaxx Miller. Photo/Lloyd Smith

OV became the third Lakes 8 team to win a district and qualify for regionals. The others are Western Michigan Christian and Ludington, which finished first and second in the league, respectively.

Ironically, Orchard View will now play Ludington on Wednesday at 8 p.m. in the regional semifinals at Clare High School.

“Playing against those teams and that competition brings us up,” said Orchard View head coach Kyle Skodack about the tough conference opponents.  “Even though the results don’t always seem like it, they really help us.”

The Cardinals, who are now 15-4-2 overall on the season, had their hands full from the start with a very good Fremont squad.

Just over eight minutes into the match, Fremont senior Riccardo Lapertosa rifled a long-distance shot that slipped through the hands of Cardinal goaltender Dakota Palencar and into the net, giving the Packers a 1-0 lead.

Orchard View tied things up with 13:59 left in the half when senior Devante Glover broke past the Fremont defense and scored.

In the second half, Glover took advantage of a Fremont turnover to net his second goal with 28:08 left, giving OV its final margin of victory. 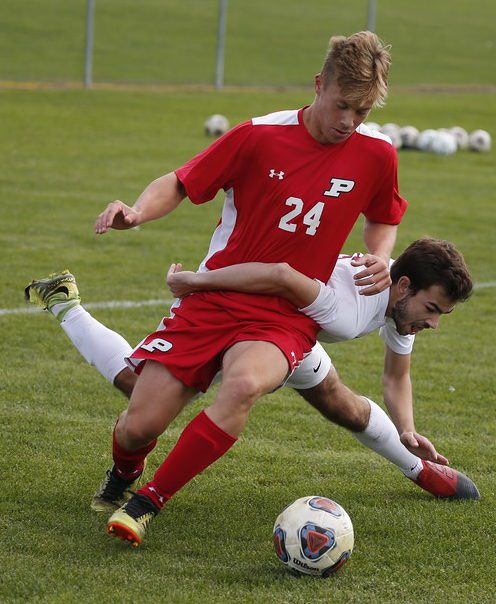 Carter Moon gets hung on by Orchard View’s No. 5 Brandon Voss. Photo/Lloyd Smith

“Their defense made some minor mistakes,” Glover said about his two goals. “They weren’t marking as tight as they should and I just took advantage of that.”

It wasn’t easy for the Cardinals to hold on down the stretch.

With 17:26 remaining, Orchard View’s Logan Woods was given his second yellow card of the game, which resulted in red card, meaning he was out of the game, as well as the first regional game next week.

The rules say a team has to play shorthanded when a player receives a red card, so the Cardinals had to battle the rest of way with only 10 players on the field, while Fremont had its full 11.

Yet the Cardinals maintained their lead, stopping three Fremont shots over the final 15 minutes.

“It’s huge for us,” Skodack said. “We’re starting to be really competitive. We’re challenging real tough teams like Fremont. They played us tough and it was really good for us to come out here and come out with the win.”

Fremont finished the season with a record of 15-4-4.

Braiden McDonald looks up at the ball for Fremont. Photo/Lloyd Smith