EGLESTON TWP. – Another week, another heart-stopper of a football game at Oakridge.

The Eagles came through with a defensive stop on the final play of the game to outlast Traverse City St. Francis 25-20 at home on Friday night.

The Gladiators had a third-and-goal at the Oakridge 5-yard-line with 25 seconds left. After a timeout, the Eagles stopped St. Francis on a run to bring up fourth down.

The Gladiators were without a timeout and rushed to the line for a final play. Quarterback Kolin Endres dropped back on a play action pass, scrambled to look for an open receiver, but his pass to the end zone fell incomplete as the clock ran out.

“Oh my gosh, I got a little light-headed there a couple times yelling,” Oakridge head coach Cary Harger said after the game. “We felt good about their pass routes and things. Of course, the longer we’re covering and they’re scrambling, guys have a tendency to get open. Our guys hung tough. They just did what they had to do.” 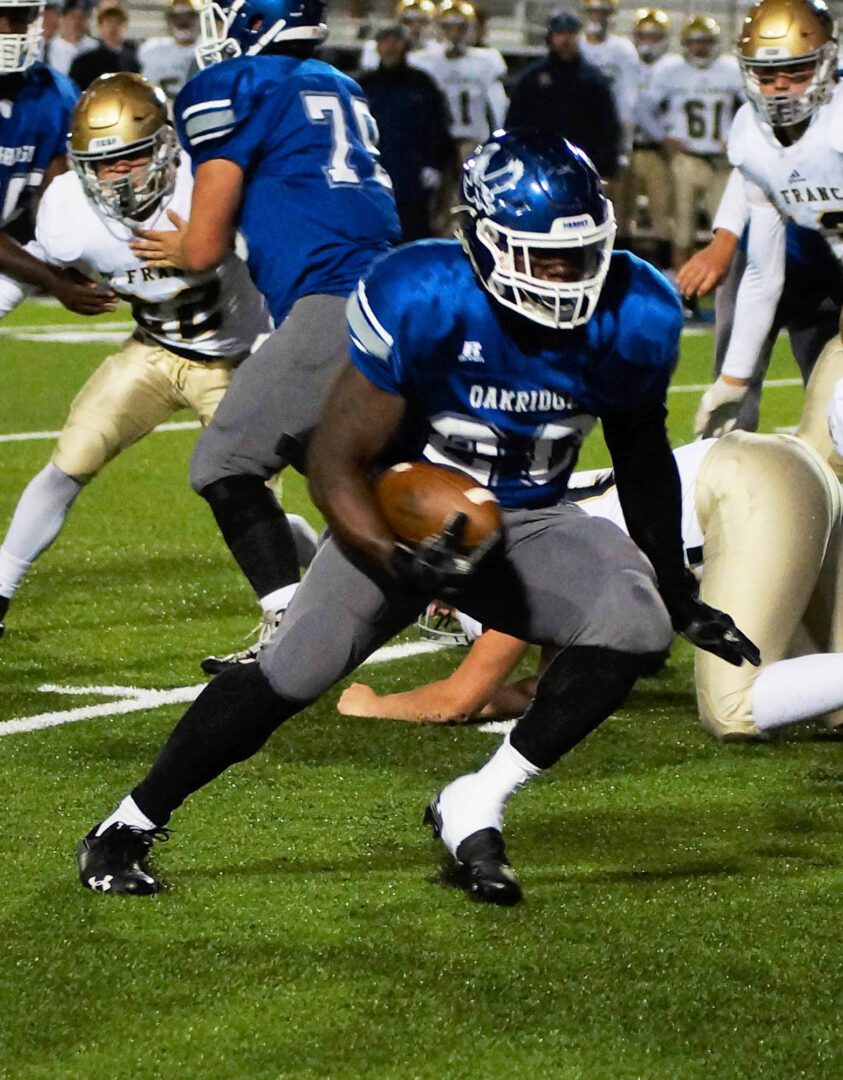 The Gladiators scored first just 49 seconds into the game. They took over at the Oakridge 9-yard-line after an Eagle fumble. Aidan Schmuckal ran in a two-yard-score, and the extra point made it 7-0.

The Eagles bounced back on their next two possessions, scoring twice on runs of 18 and 32 yards by Leroy Quinn. The later score came on the final play of the first quarter, leaving the Eagles up 13-7.

Corey Vanderputte put the Eagles back on top with 2:04 to play before halftime with a 23-yard score. Oakridge led 19-14 at the half after a failed two-point conversion attempt.

The Gladiators scored the only points of the third quarter on a 5-yard pass from Edres to Joey Donahue. The conversion attempt failed, leaving the score 20-19 in favor of St. Francis.

The teams traded punts on the next several possessions, with St. Francis milking time off the clock. The Eagles took over for their final possession with 6:41 to play.

Early in the drive, the Eagles faced a fourth-and-three at their own 27-yard line. Harger elected to go for it, and Quinn broke free for his biggest gain of the night, picking up 42 yards to jump-start the offense.

“It was to the point where we had to,” Harger said of going on fourth down. “They were starting to stall in the third quarter and using up that clock. We had to make sure that we took advantage of our opportunities.”

Quinn capped off the drive five plays later with a 16-yard score to put Oakridge ahead for good at 25-20.

Quinn led the Eagles with 189 yards and three touchdowns and topped the defense with 13 tackles. Vanderputte totaled 68 yards and a score.

The Oakridge defense plugs up the middle on a Traverse City St. Francis run. Photo/Sherry Wahr

Leroy Quinn finds a hole for an Eagle first down. Photo/Sherry Wahr

Oakridge’s Leroy Quinn rounds the end looking for a first down. Photo/Sherry Wahr