Montague pulls away to win the Battle for the Bell 29-8, clinches state playoff spot

WHITEHALL – The 113th Battle for the Bell took a quarter to really get going, and when it did, Montague rolled.

The Wildcats won their fifth straight game in the neighborhood rivalry against Whitehall, earning a 29-8 West Michigan Conference victory

Montague improved to 6-2 on the season, 5-2 in the conference, and clinched a spot in the state playoffs.

“We’re still working on executing on offense,” Wildcats coach Pat Collins said. “But we were making a lot of mistakes two weeks ago and now we are making a little less.”

With the game scoreless after the opening quarter, Montague found the end zone 14 seconds into the second when Drew Collins found Brennan Schwarz for a 65-yard TD pass. After the extra point hit the upright, the Wildcats had a 6-0 lead. 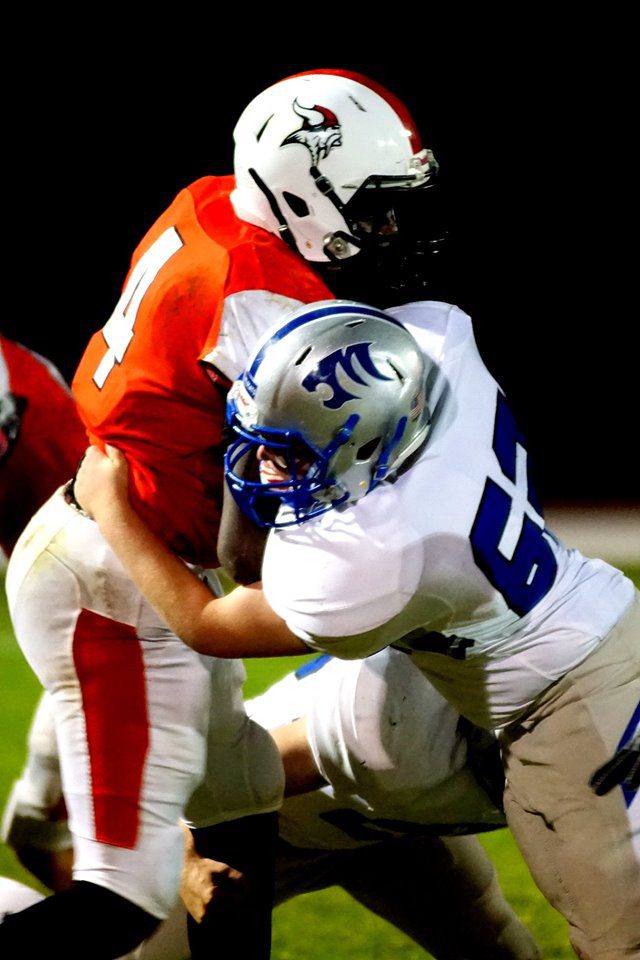 The lead lasted 15 seconds before the Vikings’ Mario Moore returned the ensuing kickoff 91 yards for a touchdown. A poor snap resulted in a failed PAT kick and the game was tied at 6-6.

The next time Whitehall had the ball, it moved to the Wildcat 43 before being stopped on a fake punt attempt. That gave Montague a short field to work with in the final 2:43 of the first half.

In resulted in an eight-play drive that ended with Collins scoring from five yards out with 33 seconds left, giving Montague a 13-6 halftime lead.

“We wanted to be aggressive, to play aggressive,” Whitehall coach Tony Sigmon said. “I felt we couldn’t sit around and wait, we had to leave it all out on the field.”

Montague opened the second half with its longest drive of the game, an 11-play, 58-yard drive that ended with Andrew Kooi’s 28-yard field goal for a 16-6 lead with 8:13 left.

The Wildcats’ next drive started at their own one-yard line, and resulted in a safety that made the score 16-8 with 4:14 left in the third.

The Vikings were still within striking distance to start the fourth quarter, but the Wildcats put the win on ice on its next two possessions.

“Our offense got better tempo in the second quarter, and we are better when we get going up-tempo,” Collins said. “Our defense has been playing great all year, that’s been our mainstay.”

Montague finished with a 353-148 advantage in total yardage.

Collins finished 17-for-23 through the air for 224 yards. Dylan Everett had 20 carries for 77 yards, while Schwarz finished with eight receptions for 119 yards, and led the defense with three interceptions.

Montague’s No. 22 Dylan Everett rushes the ball up the middle. Photo/Leo Valdez

Mario Moore checks to see if he’s onside before the snap while a fire rages in the background. Photo/Leo Valdez