CEDAR SPRINGS – The Ludington soccer team can no longer be considered an underdog.

It may have been true two years ago, when the Orioles came out of nowhere, stunned Grand Rapids South Christian in the 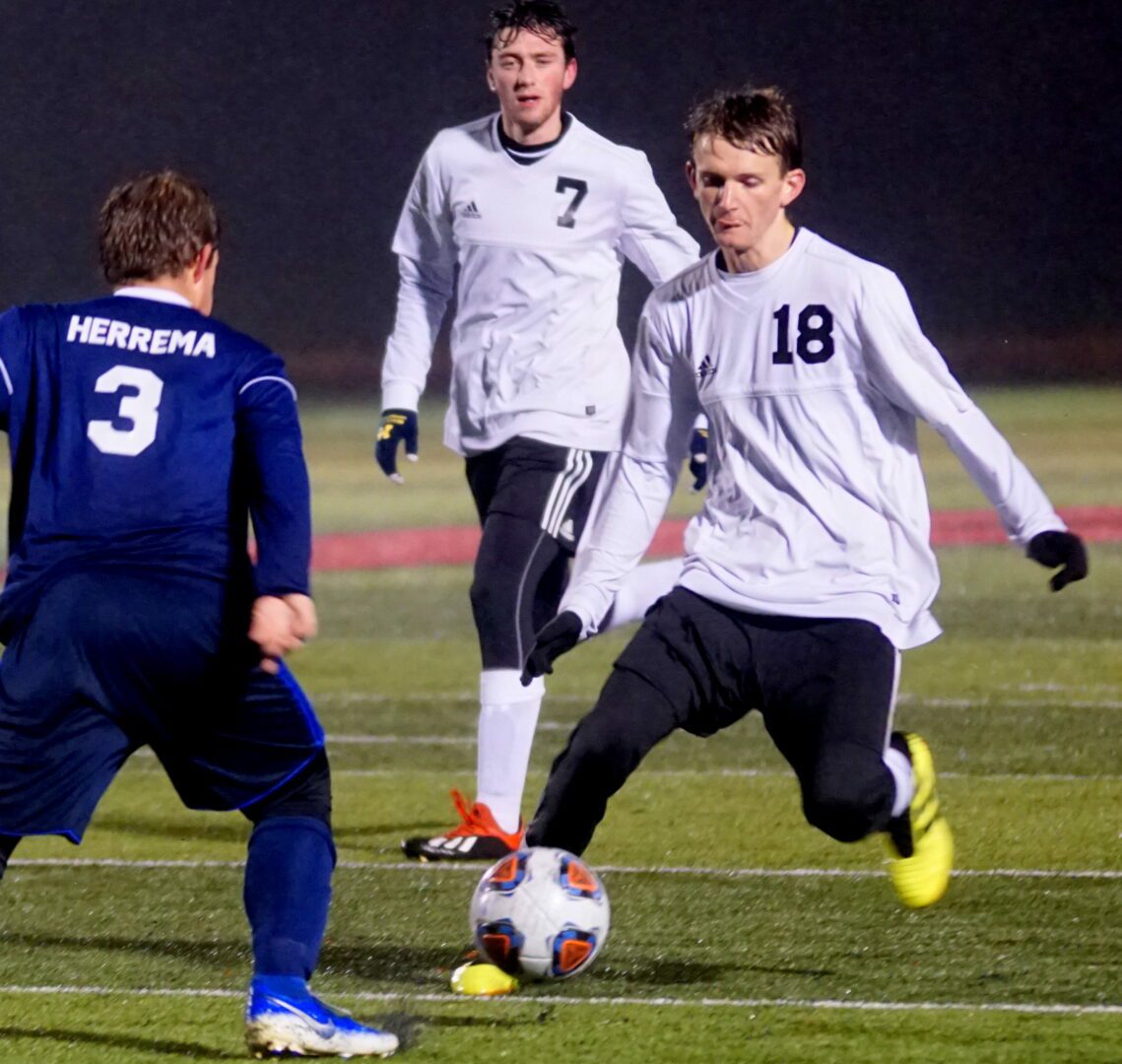 Some even seem surprised last year, when Ludington advanced to the semifinals for the second straight year before bowing out of the tournament.

But after the Orioles’ performance on Wednesday, in a 2-1 overtime shootout loss to GR South Christian in their third straight appearance in the state semis, there’s no doubt that they’ve reached the elite category.

They gave the Sailors all they could handle in a steady, cold drizzle at Cedar Springs High School. Only a pair of missed shots in the dramatic shootout kept the Orioles from returning to the state finals for the second time in three years.

Ludington has proven, time and again, that it can play with anyone in the state in Division 3.

“Two years ago, when we played that team, they were overlooking us, but they weren’t today,” said Ludington Coach Kris Anderson, whose team finished second to Western Michigan Christian, a Division 4 state finalist, in the tough Lakes 8 Conference this fall. “I had a long talk with their coach afterward, and he said he knew this game would be pretty close, and we battled all the way to the end.

“We may be a small northern Michigan town, but we’re a strong soccer program.”

Anderson said his team was much more confident than it was two years ago, when the Orioles came from behind to beat South Christian. 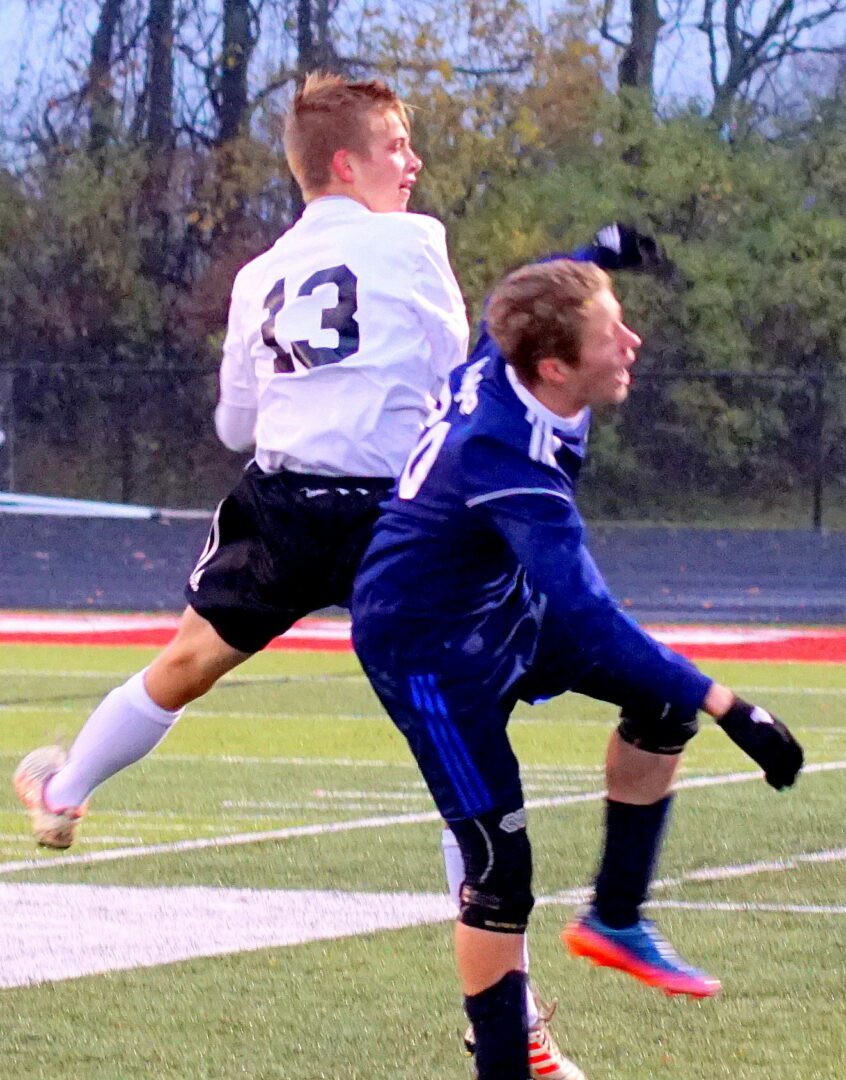 Ludington’s No. 13 Lucas Peterson gets up for a head ball against South Christian’s No. 20 Most Knapp. Photo/Leo Valdez

“With everything we’ve put together, we knew we were right there with this team,” the coach said.  “Yesterday I told my coaches, this is going to a shootout, and when it happened I had the biggest smile on my face. What a group of boys. What heart they played with.”

If anybody on the field deserved to win on Wednesday, it was Ludington junior goalie Kyle Wendt, who gave up his first goal of the postseason in the first half, after shutting out opponents in the first five games of the state tournament.

Finally giving up a goal seemed to motivate Wendt, who made several sensational diving and leaping saves in the second half and overtime to keep his team in the game.

Wendt stopped 10 shots on goal in regulation and the two 10-minute overtime periods, but also managed to smother the ball in traffic in several tense situations in front of the Ludington net.

Wendt was fighting back tears after the game, but expressed pride in how far his team has advanced in the last three seasons.

“I think we really set the standard two years ago in my freshman year, and we’re only going up,” he said. “I see a lot of success down the pike for Ludington.”

Anderson said Wendt did not really want to be the goalkeeper this season, despite his success at that crucial position two years ago.

“He wasn’t our keeper last year,” Anderson said. “He was the starter as a freshman, then we had an exchange student come over last year and take his spot, so he played the field, and at the beginning of this season that’s where he wanted to be. But then we told him he needed to be in goal, and that’s when we turned the corner. You can see why he needs to be in goal.” 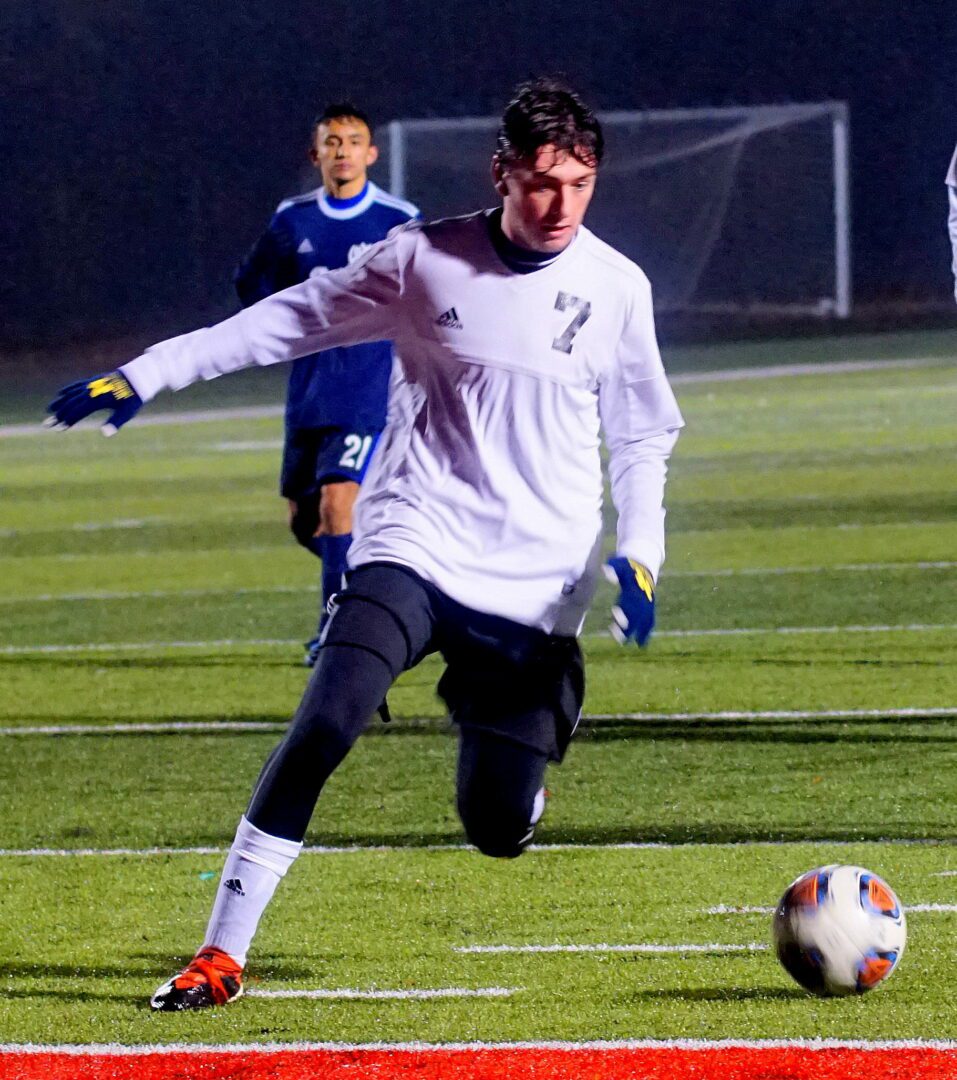 Max Know eyes open field as he gets close to the South Christian net. Photo/Leo Valdez

The two teams came into the game with very different records. GR South Christian was 21-4-2 and ranked fourth in the state in Division 3.

Ludington, which purposefully lines up a very challenging non-league schedule every year, was a far more mediocre 13-9-1, and started the state tournament one game under .500.

Those records probably led many to believe the game would be rout, and those thoughts were likely solidified when South Christian’s Jeff Herrema scored from close range just over 10 minutes in, giving the Sailors a 1-0 lead.

But finally giving up a goal in the tournament did not phase the Orioles. They struggled early in the game to mount any type of offense, but slowly gained confidence and started getting some shots toward the end of the first half.

The Orioles finally knotted the score 5:45 into the second half. Brayden Porter sent a long hard shot that was deflected by South Christian goalie Nik Schepers, but the rebound popped out to junior Noah King, who buried his second goal of the season to make the score 1-1.

It stayed that way until the overtime shootout, when shooters from each team took turns going one-on-one with the opposing goalie from close range. Four of the scheduled five South Christian shooters scored, while only two Orioles found the net.

That sealed up the victory for South Christian, which now advances to Saturday’s Division 3 state finals.

Evan Shay gets ready to make a throw in for Ludington. Photo/Leo Valdez

Ludington goalkeeper Kyle Wendt comes up with a save. Photo/Leo Valdez