It’s almost here – the date that’s been circled on many Muskegon-area calendars since the beginning of the football season, when fans started checking schedules to see who played who and when.

Week 8 of the prep football season brings with it two long-anticipated games, plus one that has evolved into a high-stakes showdown.

Fans have been waiting to see Muskegon and Mona Shores, two of the state’s top teams, do battle all season. The same goes for Montague and Whitehall in the annual “Battle of the Bell,” one of the premier rivalries in West Michigan.

Fans will also be treated to a somewhat unexpected showdown – a West Michigan Conference championship matchup between co-leaders Ravenna and Oakridge.

With the high-stakes and tense atmospheres at these three games, it was easy to select them as our Local Sports Journal “Spotlight Games” for Week 8.

Check out localsportsjournal.com on Friday night for full coverage of these games, as well as reports from all other 13 area games, with three teams (Kent City, Ludington and Muskegon Catholic Central) playing to clinch state playoff berths.

In recent years, the annual clash between the Big Reds and Sailors has become one of the state’s top showdowns. While the all-time series is 31-7 in favor of Muskegon, it’s been more even in recent years. 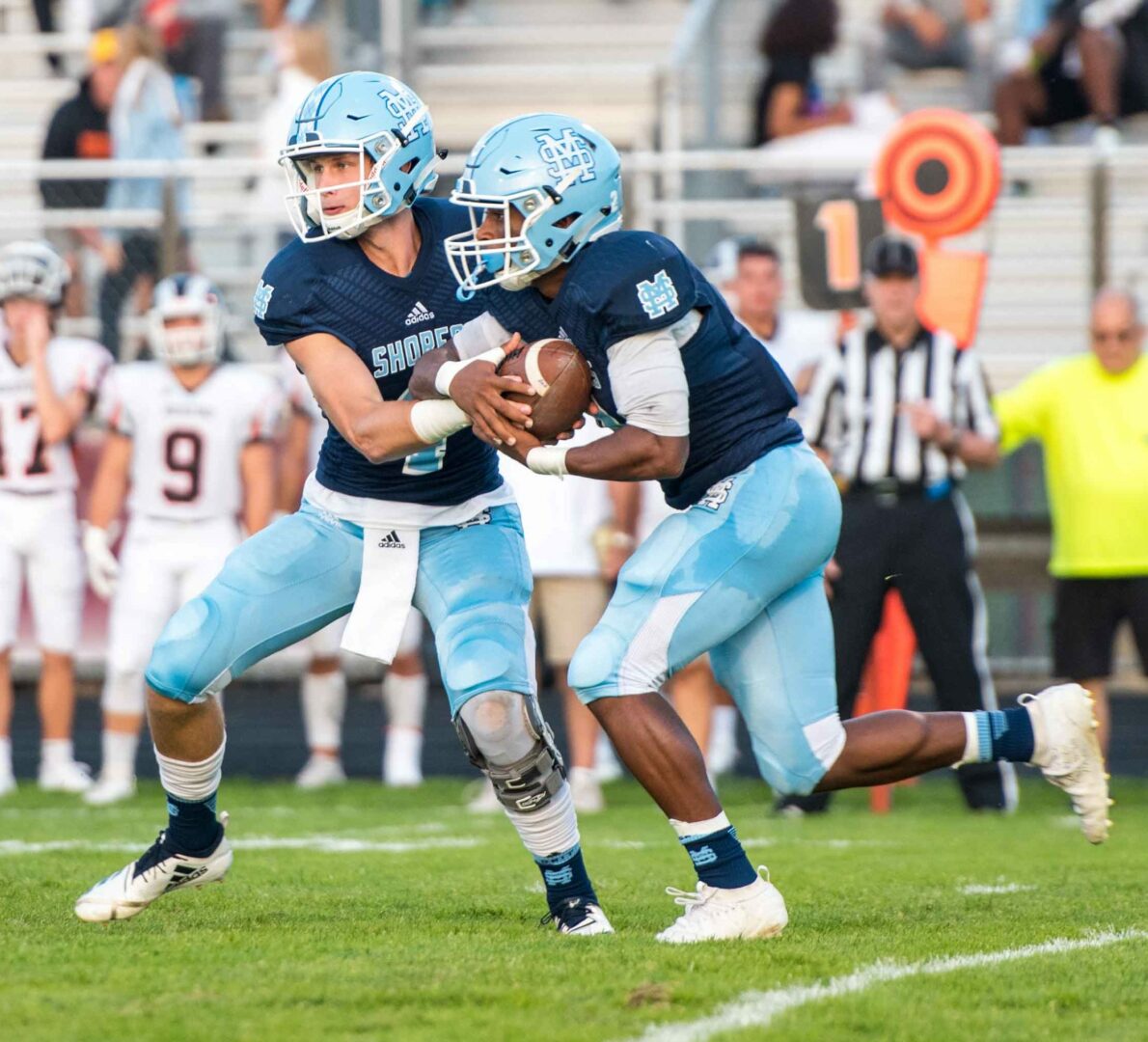 In the last six meetings, dating back to 2014, Muskegon leads 4-2. Shores won back-to-back games in 2014 and 2015 before the Big Reds won the last four. All games have finished within a 21-point margin.

Since 2013, the winner of this matchup has won the O-K Black Conference. At least a share of the conference title is up for grabs this week, with the winner having a one-game lead with one game remaining.

Muskegon, ranked No. 1 in the state in Division 3, comes in after another dominating win, picking up its third shutout of the season with a 59-0 drubbing of Grand Rapids Union. The Big Reds are scoring 47.9 points per game and allowing just 8.3.

The Big Reds are led by senior quarterback Cameron Martinez. The Ohio State commit hasn’t been needed as much in four straight blowouts, but ran for 79 yards and a touchdown on just three carries last week, and both of his completed passes went for touchdowns.

Tre’Shawn Hatcher has been the lead man for the Sailor offense, rushing for 953 yards and 11 touchdowns in six games, including 209 yards last week against Jenison. Quarterback Caden Broersma has been great since returning from a broken hand, accounting for 13 touchdowns in five games.

The Bulldogs and Eagles have been playing since 1965, and this might be one of the biggest matchups yet. There have been five seasons in which this game ultimately decided the West Michigan Conference title, but none of those came in the final week of conference play. 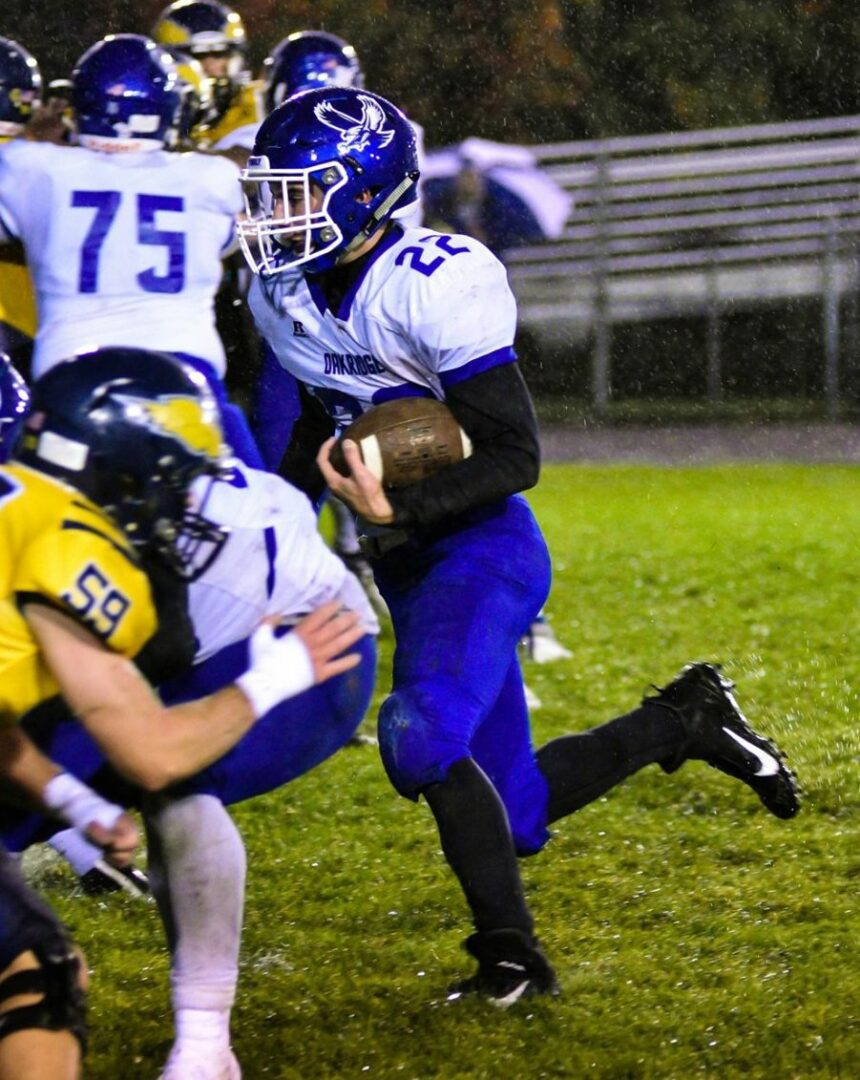 That changes Friday. Both teams come in at 6-0 in the conference with just each other left to play. The Eagles are looking for their first title since 2016, while Ravenna is playing for its first since a three-way tie in 2001. The Bulldogs last won an outright league title in 1995.

Ravenna has been one of the top stories in the area. After finishing fourth in the conference last season and just missing out on the playoffs, the Bulldogs have shown they are a force to be reckoned with this season.

Many expected Oakridge to take a step back this season after losing a talented senior class. The Eagles returned just four players that started on the 2018 team, but haven’t missed a beat.

The Oakridge offense is led by running backs Leroy Quinn and Corey Vanderputte, who combined for 381 yards and five touchdowns last week against North Muskegon.

The leader of the Ravenna offense is quarterback Connor Kilbourne. The senior totaled four touchdowns in a blowout win over Hart last week, with three rushing and one passing. Dalton Hogan is coming off a strong performance after gaining 161 yards on the ground.

This game might not hold the same weight in the standings as the first two games on the list, but that doesn’t mean much when these two neighborhood rivals meet up. 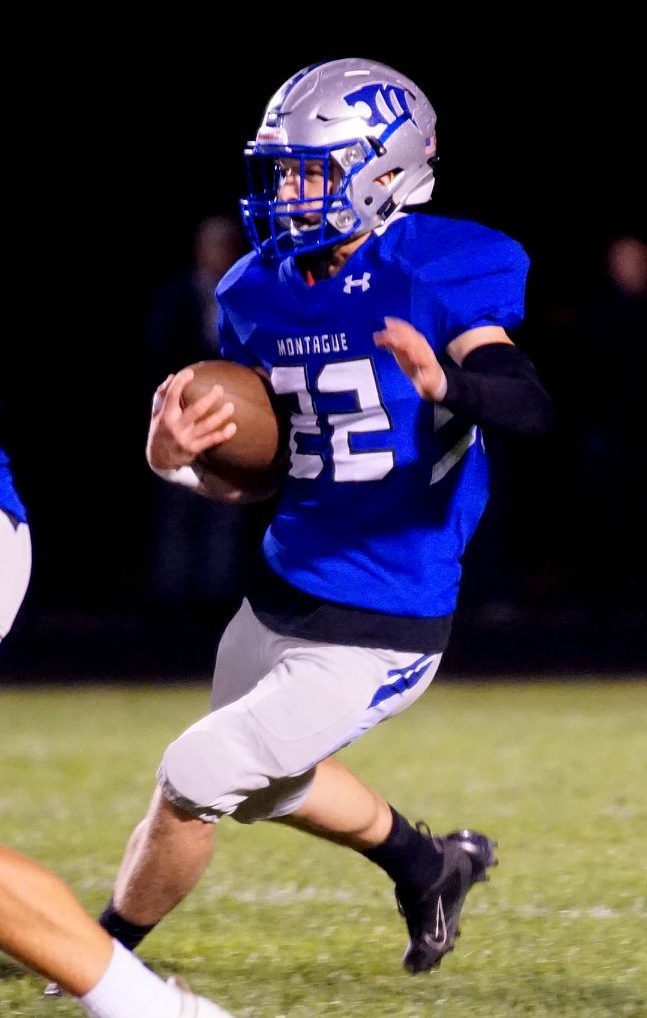 The Battle for the Bell will have its 113th installment on Friday night. The Wildcats lead the all-time series 62-48-2 and have won four straight.

While this year’s game will not impact the West Michigan Conference standings, it could have a big effect on the playoff picture. Montague needs one more win to automatically qualify for the playoffs, and has undefeated Portland waiting in Week 9. Losses in both of the last two games could make a playoff berth questionable for the Wildcats.

The Vikings also have an outside shot at the playoffs if they can win out and finish 5-4. That won’t be easy, facing Montague and Montrose (6-1) to finish the year.

The Wildcats come in following a 75-0 win over Shelby, which snapped its two-game losing streak, their longest in a single season since 2014. Quarterback Drew Collins threw for 180 yards, ran for 58 more and totaled five touchdowns. Dylan Everett rushed for 148 yards and three touchdowns.

Whitehall was also a big winner last week, topping Mason County Central 59-0. Kayleb Venema led the rushing attack with 145 yards and a pair of scores. Quarterback Brodie Fogus rushed for 106 yards and a touchdown, while throwing for 80 yards and two scores.