MUSKEGON – As a student-athlete representative on the hiring committee for a new varsity football coach, Reeths-Puffer senior Daven Fox said he was sold on Matt Bird’s positive attitude and long-term vision for the program. 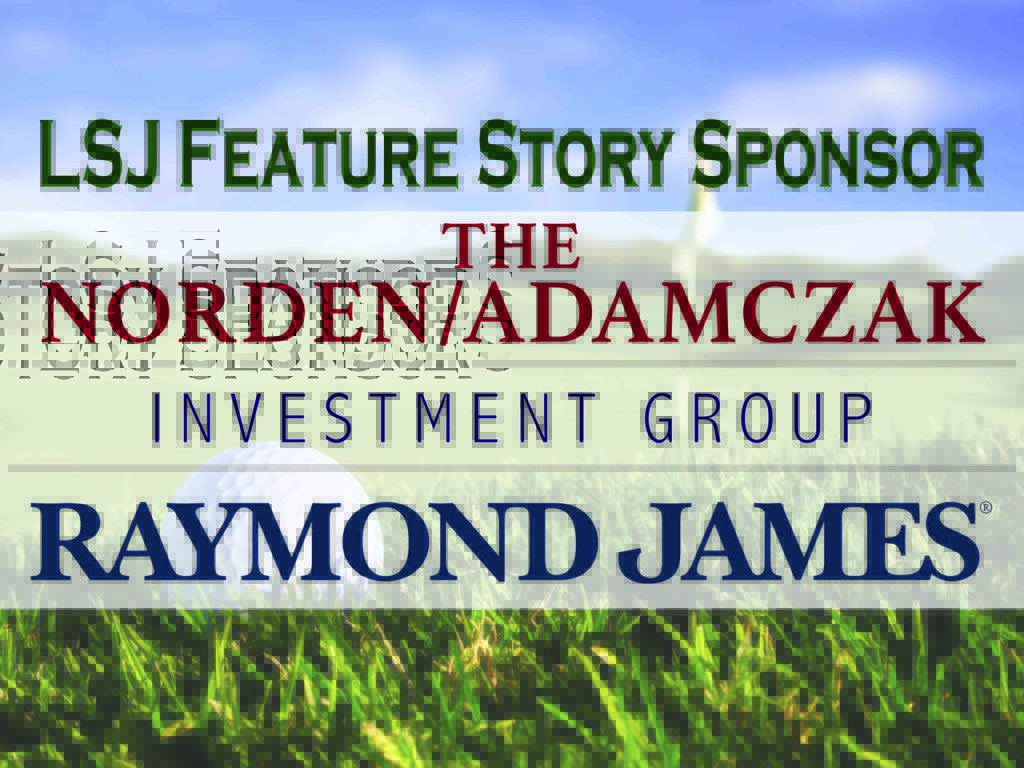 And almost immediately, Bird was sold on the talent and potential of Fox and senior quarterback Evan Moskwa.

“Those two, you could just see it in their eyes, their desire to compete and get better,” said Bird, who is in his first season as the R-P coach. “And throughout this season, they’ve both been like sponges in learning and taking in as much as they can.

“At the same time, they’ll come to you with ideas. They’ve suggested some great in-game stuff as far as adjustments. They’ve been through it, so you trust what they’re seeing out there.”

When the quarterback-to-receiver combination of Moskwa-to-Fox is humming in high gear, the Rockets are tough to slow down. 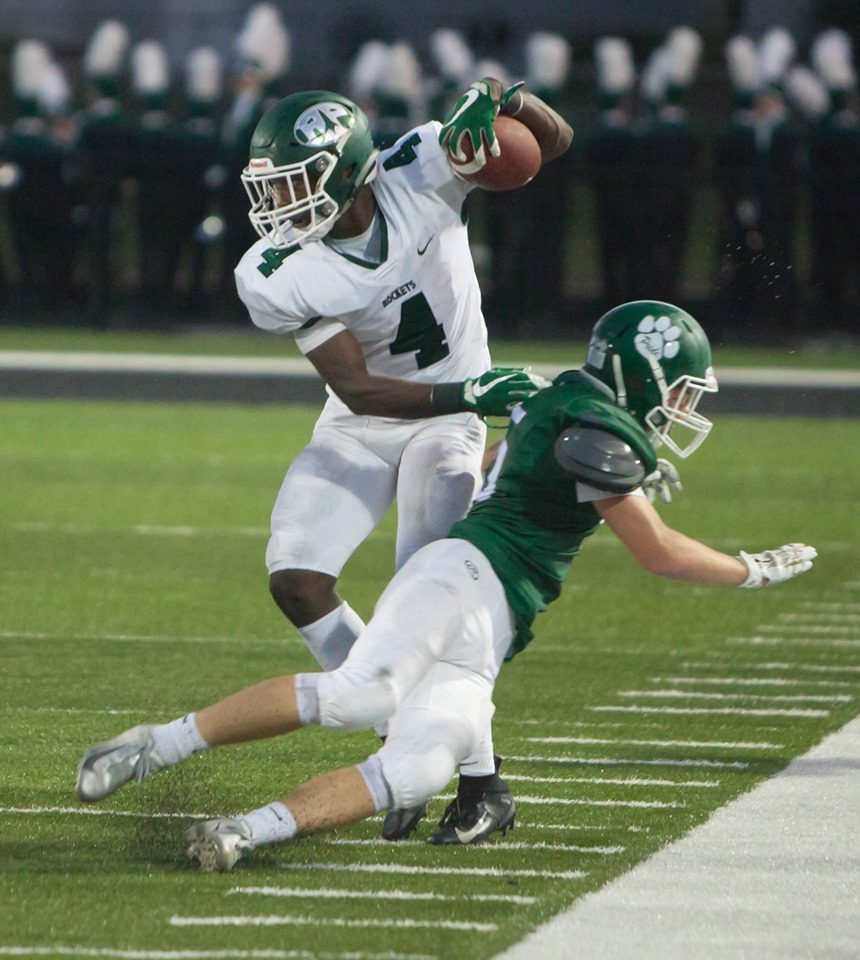 Bird said he recognized early on that the team would be better off getting the ball in the hands of Fox as often as possible.

The 5-foot-9, 175-pound Fox has been especially lights out two games this season. During a win against Grand Rapids South Christian on Sept. 6, he did his damage at running back, rushing six times for 131 yards and a touchdown. He also had a receiving score in the 35-21 win.

Two weeks later, the Rockets fell short in a high-scoring shootout at Jenison, but Fox was tremendous with 10 catches for 176 yards and a touchdown. He also had a 96-yard kickoff return for a TD.

Although the Rockets had a forfeit win last week due to injury issues at Grand Rapids Union, Fox still has great season numbers. Through five games he has 22 catches for 311 yards for the Rockets, who are 2-3 overall.

When he catches a pass in the flats, or has some open space in a 1-on-1 situation with a defender in his way, Fox is a nightmare to bring down.

“(Breaking tackles) is something I’ve always been pretty good at,” Fox said. “I’m thankful to be blessed with good speed and an ability to move. It’s just something I’ve been born with.”

“I’ve seen him break some tackles live and it’s been pretty special, then I watch it later on film and you’re just blown away,” the coach said. “His balance is just tremendous. And he has the natural ability to make a defender miss. He’s got his cuts planned a step or two ahead of the defender. So when he does it, he’s able to set it up to get to the next level.” 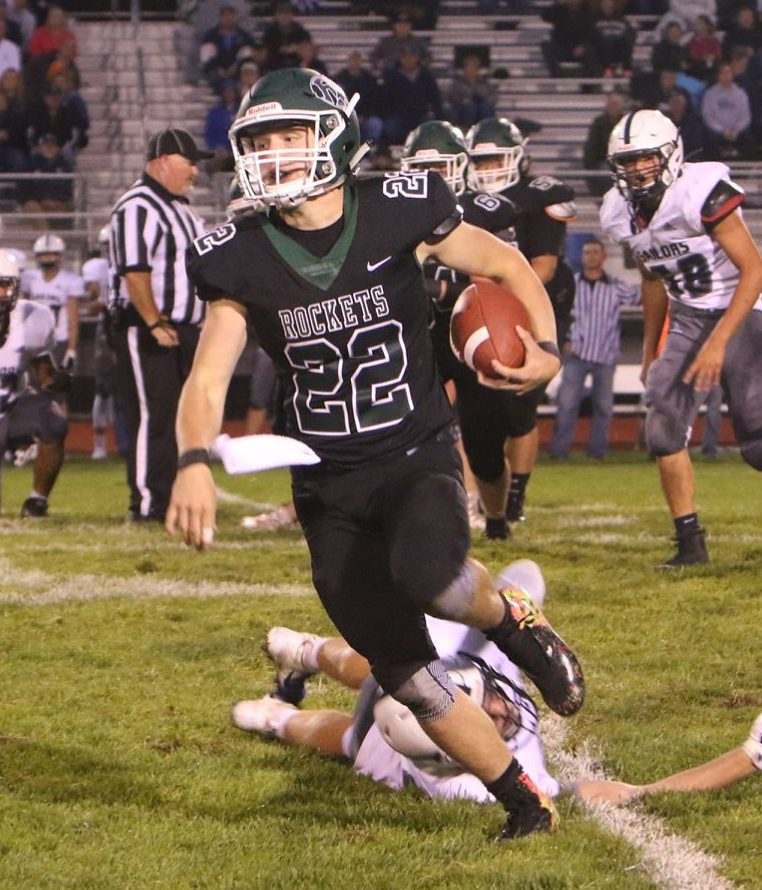 Fox, who said has received scholarship offers to Division 2 schools Wayne State and Northwood, said he believes he has the talent to play Division 1. He also believes his quarterback could play college football,  but Moskwa has already committed to play lacrosse at Cleveland State University.

“I’ve been playing with him since seventh grade and we’ve just been able to form a bond over the years,” Fox said of Moskwa. “I’m thankful for him coming out and playing his senior year. There was some word around school that he might not play his last year because he wanted to focus on lacrosse. I never knew how close he was to not playing, but I’m glad he’s with us.”

Bird said the concern over Moskwa’s desire to play was never an issue. Just a couple days after he committed to Cleveland State, he was back doing footwork drills with the Rockets’ coaching staff.

“He’s got the arm strength, the awareness,” Fox said. “He just knows where to hit people (on throws) so they can make plays.”

While the Rockets’ offense has been clicking, Fox said they need to shore up some things defensively if they want to win the rest of their games, get to six wins and earn an automatic playoff berth.

Reeths-Puffer hasn’t qualified for the playoffs since 2013, and to end the drought they’ll have to defeat Greenville on Homecoming this Friday, followed by Fruitport, Kenowa Hills and the regular-season finale against powerhouse Muskegon.

“We need to clean things up on defense,” Fox said. “We don’t talk enough and we haven’t been physical enough at the line of scrimmage.

“I’m looking forward (to playing Muskegon),” he added. “I hope my team comes out and is ready to play, too. If we’re ready to battle and give it our all, we can compete at a high level and against anyone.”