NORTON SHORES – Like the Incredible Hulk, you don’t want to play Muskegon when the Big Reds are angry.

Unfortunately for host Mona Shores, the beast was unleashed at Sailor Stadium on Friday.

In a stunning final that few saw coming, Muskegon, the No. 1-ranked squad in Division 3 and arguably the top team in the entire state, made a resounding statement by completely dismantling a solid Sailors squad 53-0.

It was Mona Shores’ worst loss since a 59-14 loss to Greenville in 2011, which was head coach Matt Koziak’s first year at the school.

Muskegon ran its unbeaten record to 8-0, and clinched at least a tie for its fourth-straight O-K Black Conference championship with a 5-0 league mark. Mona Shores fell to 6-2 and 4-1 in league action. 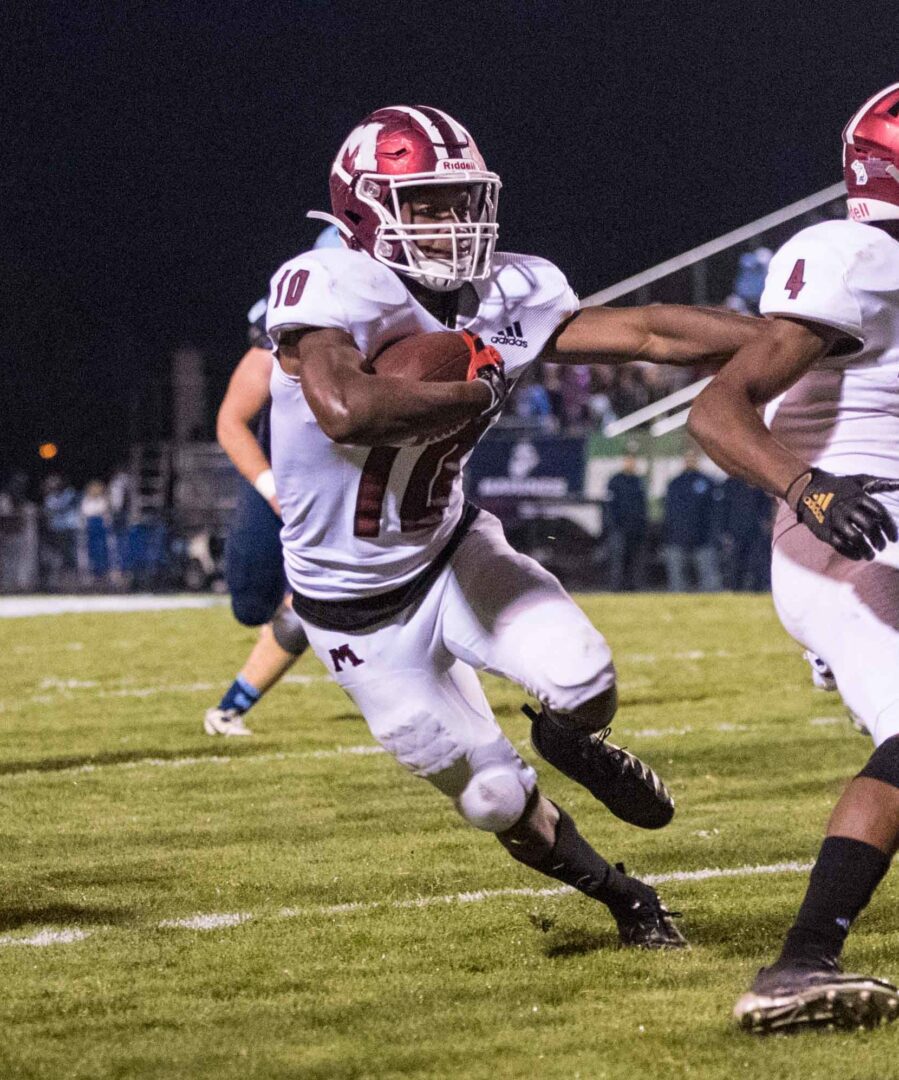 Tommy Watts follows his blockers as he breaks through for a Big Reds touchdown. Photo/Eric Sturr

Senior lineman Billie Roberts and senior running back Tommy Watts said the Big Reds were motivated by some bulletin board material featuring comments by Mona Shores players in the media, and predictions that the score would be close.

“A couple players from Mona Shores said they were going to take something from us,” Roberts said. “We took it personal.”

“We looked at some of the predicted scores and they were a lot closer than what we thought it should be,” Watts said. “We wanted to come out and prove people wrong.”

Muskegon’s defense was dominant throughout, flying sideline to sideline and limiting the Sailors to just 47 total yards. The offense was equally sound, totaling 468 yards, including 117 passing yards and two touchdowns from senior quarterback Cameron Martinez.

Martinez also chalked up 170 yards and two touchdowns on the ground.

Roberts led the charge with a persistent rush on Sailors’ quarterback Caden Broersma. Roberts, who has been on varsity since he was a freshman, said he cherished having the opportunity to be a part of four O-K Black championship teams.

“To see four different senior classes win it, and seeing them be led four different ways, it’s taught me a lot along the way,” he said. “So it’s amazing to be a part of that.”

Muskegon took control in the first quarter, rolling to a 19-0 advantage. The Sailors’ offense was a mess with four negative plays, three penalties and a total of one yard. 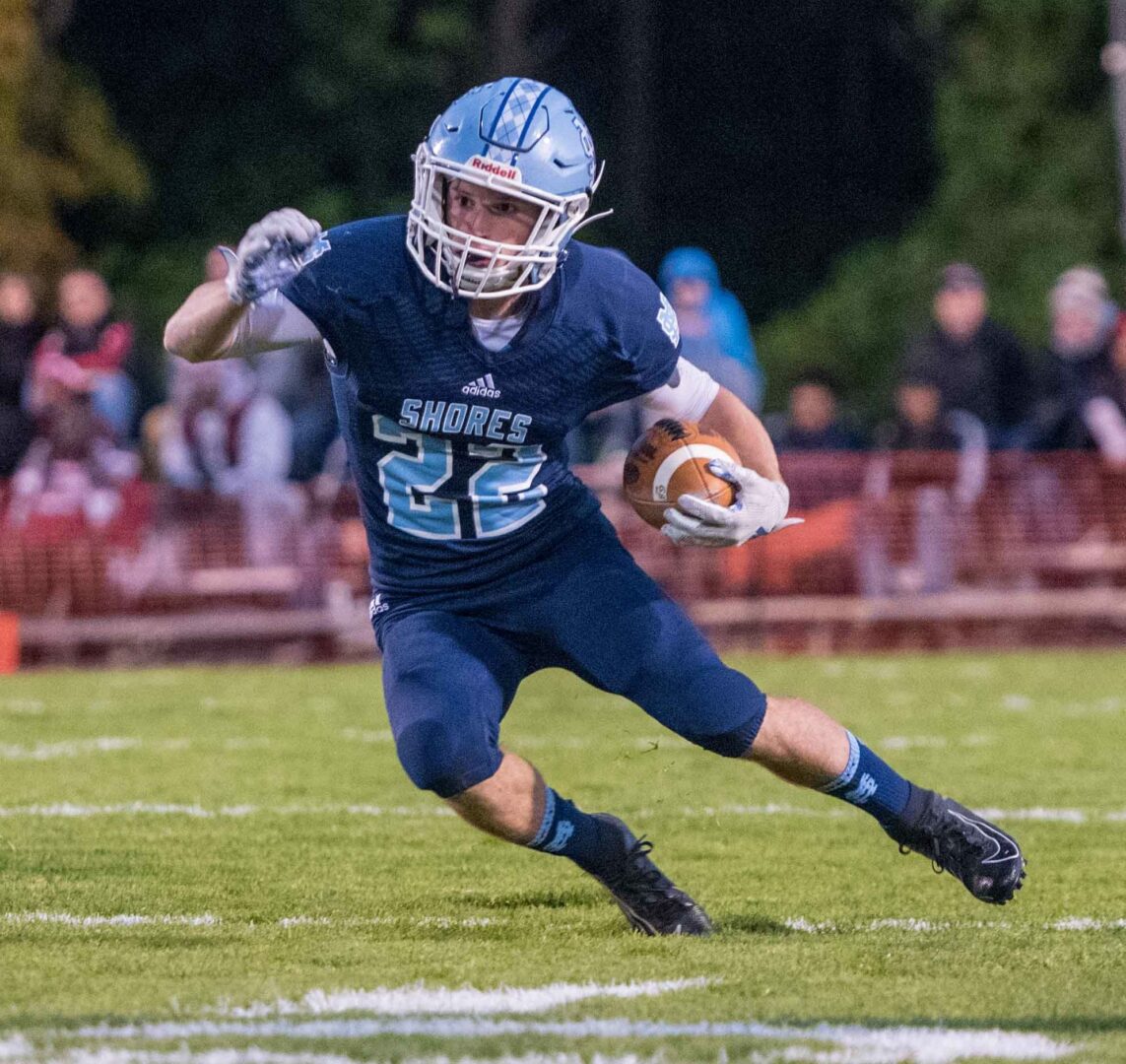 Muskegon’s second offensive play was a 67-yard touchdown for Martinez, who streaked through a huge hole off left guard, opened up by Tayvid Elmore and Roberts.

The Big Reds scored on their other two possessions in the quarter, on a six-yard run by Watts and a 38-yard reception by Tyrese Oakes. Mona Shores had decent coverage but Martinez tossed an on-the-money pass that allowed Oakes to haul it away from the defensive back.

“A lot of teams don’t fear the pass against us, so it opens up a lot of the field for our receivers,” said Watts, who had a 59-yard touchdown reception in the second quarter. “Then defenses have to back up to try to take that away, and that opens up our run game.”

Martinez added a six-yard TD run with 6:14 left in the second, and Watts’ wheel route left him wide open for his long touchdown catch.

Mona Shores had 12 plays that went for negative yards in the first half.

“We really emphasize alignment, assignment and execution – that’s our motto on defense,” said Muskegon head coach Shane Fairfield. “That’s kind of what we emphasized this week, because in the past (Mona Shores) has shown a lot of different formations and shifts and motions that have got us out of position.

“So we felt if we just got our alignment part of it correct, that gives us a 50, 60 percent chance to make the play. If we understand our assignments, then we have an 80 to 90 percent chance. And then if we get off of blocks and make tackles in the open field like we did tonight, that gives a chance for a shutout.”

Watts’ 28-yard touchdown run made it 41-0 and forced a running clock early in the third quarter. The Big Reds added a 27-yard touchdown by Jacarri Kitchen-Thomas later in the third, and a six-yard score by backup quarterback Amari Crowley with 6:29 left to play in the fourth.

Tre Hatcher was the leading rusher for Mona Shores with 31 yards on 11 carries.

Tyreese Oakes hauls in a 38-yard touchdown pass from Cameron Martinez for the Big Reds’ third score in the first quarter. Photo/Eric Sturr

Mona Shores’ Tre’shawn Hatcher scampers for the Sailor first down early in the contest. Photo/Eric Sturr