Big Reds continue to roll, plowing past R-P 56-0 to complete another 9-0 regular season

MUSKEGON – With the offense and defense in sync and looking playoff ready, Muskegon finished off another perfect regular season on Friday.

The Big Reds improved to 9-0 with a 56-0 victory over Reeths-Puffer in O-K Black Conference action at Rocket Stadium on Friday.

Muskegon finished 6-0 in conference play and clinched the O-K Black championship. The Big Reds allowed only 10 points in those six games.

Reeths-Puffer finished 5-4 overall and 3-3 in the conference. The Rockets still hope to sneak into the state playoffs, and will learn their fate on Sunday night when the MHSAA postseason matchups are announced.

The Rockets took the opening drive deep into Big Red territory but were stopped on fourth down at the 38.

“We let them drive a little bit, and they were able to dink-and-dunk on us,” said Muskegon coach Shane Fairfield, whose team has now posted three straight perfect regular seasons. “We made some adjustments, we are a team that likes to blitz, but in big games we have to learn to play better zone defense.” 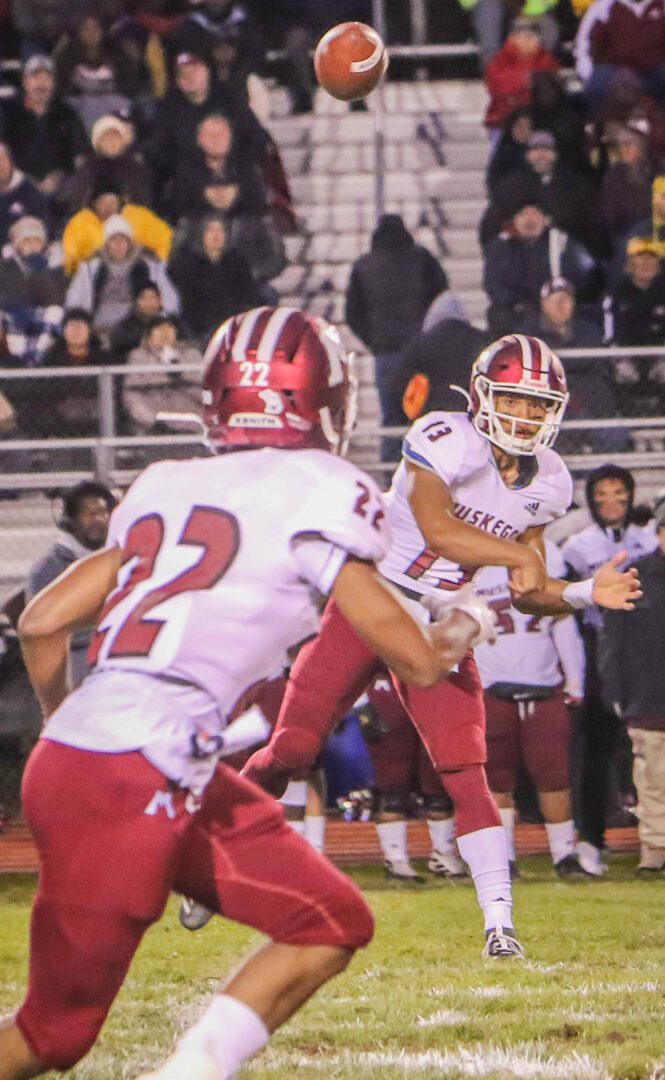 The Big Reds took their opening drive 62 yards in 10 plays and took a 7-0 lead on Tommy Watts’ 2 yard score with 5:26 left in the opening quarter.

The Rocket offense struggled after that, and Muskegon’s offense started its next six drives of the half in Reeths-Puffer territory, resulting in five touchdowns and a 42-0 halftime lead.

“We knew that this would be a field position game,” Rockets coach Matt Bird said. “Muskegon is a veteran team and they force you to do things you don’t really want to do.”

Touchdowns from Watts on an 18-yard run and Cameron Martinez on a 5-yard run put Muskegon up 21-0 at the end of the first quarter.

Martinez found Quenten Reynolds for a 27-yard TD pass, and Japrie Henderson (9 yards) and Watts (20) finished off the first half scoring with rushing touchdowns.

Martinez finished the first half 8-for-12 through the air for 133 yards.

“We want to show people we can throw the ball and make them defend the entire field,” Fairfield said. “We did that earlier in the year, and we planned on it going in (to this game).”

With a running clock in the second half, Muskegon added two third quarter touchdowns.

Watts led Muskegon with 73 yards on eight carries, Martinez added 68 yards, and Gee had 55 yards. Jose Gutierez was 8-for-8 on extra points.

Muskegon’s No. 4 Japrie Henderson finds the end zone as the Reeths-Puffer defense tries to hold him back. Photo/Joe Lane

Cameron Martinez leans into the run for Muskegon as No. 30 Colby Stephenson trails. Photo/Joe Lane

Evan Moskwa gets ready to make a pass for Reeths-Puffer. Photo/Joe Lane