MENDON – A near flawless performance, especially in the first half, earned the Muskegon Catholic Central Crusaders a spot in next week’s Division 8 football semifinals.

And that dominating performance came against none other than against top-ranked Mendon by the score of 28-6. The loss snapped the defending state champion Hornets’ 25-game winning streak and was their first loss on their home field since 2006. 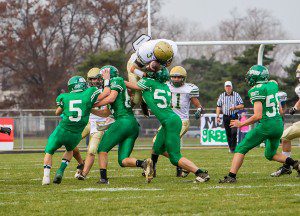 Muskegon Catholic’s Nick Holt goes up high to pull down an attempted onside kick by Mendon in the early stages of the third quarter. Photo/Tim Reilly

The Crusaders (9-3) will face Harbor Beach at a site to be determined. The winner will play for a state championship the following week at Ford Field in Detroit.

On Saturday, it was all Crusaders on both sides of the ball. MCC’s running game churned out 388 yards and its stingy, hard-hitting defense limited the Hornets to 252 yards. Mendon running back Tyler Harris had more yards than that last week in its district title game.

MCC’s running game was a two-headed monster that stung the Hornets all afternoon. Tommy Scott rushed 19 times for 146 yards and three touchdowns and Jessie Anderson added 136 yards on 17 carries. And for good measure, quarterback Zach Campbell rushed 10 times for 63 yards and directed a Crusader offense that did not turn the ball over.

“We moved the ball consistently, which was nice,” MCC coach Mike Holmes said. And that consistency came without standout Alex Lewandoski, who tried to play, but he reinjured his ankle after just three plays.

Scott scored on runs of 20, 5 and 11 yards. MCC also scored on a 26-yard touchdown pass from Zach Campbell to Cari Campbell with less than a minute left in the first half.

It was that TD pass that capped a solid opening 24 minutes for Coach Holmes’ team.

“We tried to throw the ball to Cari in the flat and he was covered so he turned it up,” Holmes said. “Being up 14-0 at half and they come out and get a touchdown, it’s 14-7. We didn’t want them to score, obviously, but that touchdown (by Campbell) was big.

“It was nice playing with the lead and putting a little more pressure on them,” Holmes said. “How 5 ran (Scott) and 21 (Anderson) ran was the key for us and our quarterback putting us in good situations.”

Scott’s first touchdown culminated a 9-play, 80-yard drive. During that drive, Zach Campbell had a 25-yard run and also found Blake Sanford for 15 yards on a third down and 15 play.

Midway through the second quarter, the Crusaders struck again. This time, Zach Campbell led his team on an 82-yard drive that took 11 plays. Sanford rushed for 22 yards, Anderson rushed for 12 yards on an option play, and finally, Scott scored from 5 yards out.

It appeared the Crusaders might be content with a 14-0 halftime lead, but Holmes had other ideas. Starting at their own 35, the Crusaders quickly marched down the field on four running plays, the best of which was a 30-yard run by Scott who started out going left then cut across the grain and wasn’t hauled down until he reached the Hornet 28.

Four players later, Zach Campbell rolled right and appeared ready to take off when he lofted a pass over the defense and into the hands of Cari Campbell who darted into the end zone with 50 seconds left in the half.

That late score made the Crusaders feel a bit more comfortable.

However, that feeling quickly dissipated on Mendon’s first drive of the third quarter. Sophomore Mitchell Coler, who did not touch the ball in the first half, broke through the line and outraced the defense on a 67-yard touchdown run. With less than two minutes expired in the half, the hosts were back within two scores.

As many expected, Mendon tried the onside kick with the hopes of not only gaining another possession, but getting the second-half momentum squarely on its side. Sophomore Nick Holt squashed that hope when he soared high over a Hornet player and pulled the ball down and the Crusaders took over.

With that field position, the Crusader methodically drove down the field on a seven-play drive that covered 63 yards. Anderson rushed four times on that drive for 42 yards. Scott dove into the end zone on an 11-yard run and MCC was back in a comfort zone with a 28-6 lead.

The Hornets tried some different looks on its next drive, but it did no good as the Crusaders’ defense held tough.

An interception by Nick Holt with 4:08 left prompted an early celebration from the Crusader faithful who made the two-hour trek to Mendon.

Harris, who rushed for 269 yards last week, finished with 14 carries for 18 yards. Quarterback Nick Eberstein ran 10 times for 34 yards and completed 10-of-20 passes for 123 yards.

“I’ve seen two games where Tyler Harris just runs like a wild man and he runs all over the field,” Holmes said. “We did a nice job of containing him. They hurt us a little bit in the second with the pass and the one run (Coler).”

“We got beat in the trenches today and that is unusual for our kids, but they played a lot harder and were just tougher than us up front and it showed,” Hornet coach John Schwartz said. “We couldn’t block and get on people and stay on blocks and they came down and played real hard.”