The Michigan Department of Natural Resources

Three recent trail camera photos of cougars in the Upper Peninsula have been verified by the Michigan Department of Natural Resources. 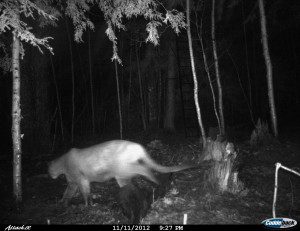 The Michigan DNR is verifying that this trail cam photo is not only authentic, but proves there are cougars in the Upper Peninsula. Photo/DNR

Two of the photos, both of a cougar with a radio collar, were taken in October in Menominee County – one near Cedar River and one near Menominee just north of the Wisconsin border.

In the fall of 2011, a radio-collared cougar was photographed in Ontonagon, Houghton and Keweenaw counties. Although the cougar recently photographed in Menominee County is wearing the same type of radio collar, DNR wildlife biologists are currently unable to determine whether this is the same animal or another transient that has dispersed from western states.

All three photos were taken by trail cameras located on private property and the landowners have asked to remain anonymous. DNR Wildlife Division staff were able to visit each location to confirm the authenticity of the photos.

DNR Wildlife Division staff have now verified the presence of cougars in the Upper Peninsula 20 times since 2008.

“The increasing number and frequency of verified cougar sightings in recent years are likely due to three factors in particular: The growing popularity of trail cameras used to monitor wildlife activity in the woods 24 hours a day; additional transient cougars moving east from established populations in western states as they seek new territory; and the cooperation of the public in reporting cougar sightings and sharing their photos with us for official review, which we greatly appreciate,” said Adam Bump, one of four DNR biologists specially trained to investigate cougar reports.

Established cougar populations are found as close to Michigan as the Dakotas, and transient cougars dispersing from these areas have been known to travel hundreds of miles in search of new territory. DNA evidence collected from a cougar hit and killed by a car in Connecticut in 2011 showed it had originated in western South Dakota.

Cougars, also known as mountain lions, were native to Michigan, but disappeared from the state in the early 1900s. The last confirmed wild cougar in Michigan prior to 2008 was an animal killed near Newberry in 1906.

Although cougar sightings are regularly reported, verification is often difficult, due in part to a lack of physical evidence. Characteristic evidence of cougars include tracks – which are about 3 inches long by 3 1/2 inches wide and typically show no claw marks – and suspicious kill sites, such as deer carcasses that are largely intact and buried with sticks and debris.

Protecting evidence such as tracks, scat and cached kills from the elements with a bucket or tarp greatly improves the chances that a reported sighting may be verified by DNR wildlife staff.

Wildlife biologists on the DNR’s cougar team investigate evidence that is reported or submitted, and may visit sites to verify the location and collect additional information. The team then evaluates the collected information and decides whether the presence of cougars can be confirmed.

Reports of cougar tracks and other evidence should be made to a local DNR office or by submitting the sighting on the DNR’s online reporting form at www.michigan.gov/cougars. If an emergency situation exists, call the department’s 24-hour Report All Poaching line at 800-292-7800.

Cougars are classified as an endangered species in Michigan. It is unlawful to kill, harass or otherwise harm a cougar except in the immediate defense of human safety. To learn more about cougars and how to identify their tracks, visit www.michigan.gov/cougars.