Back and forth they went for more than 61 minutes. 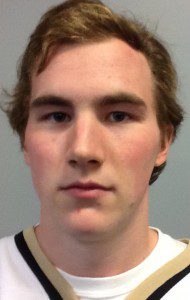 Not until Muskegon Lumberjack Cullen Hurley scored at 1:49 of the overtime. It was that tally that gave Muskegon a 1-0 victory over the Green Bay Gamblers. It also meant a split in the two-game series between the teams at L.C. Walker Arena.

A turnout of 2,000 saw the Jacks raise their record to 12-7-1 for 25 points in the Eastern Conference standings.

“We got the neutral zone regroup and Joe Cox picked it up and kind of shoved it up to me and skated down on a 1-on-2,” Hurley said. “I kind of cut across the blueline and shot far side and it hit the post and it luckily went in.”

It ended a long, scoreless game in which goaltenders Kevin Lindskoug of Muskegon and Mike Rotolo of Green Bay made every save until Hurley was able to beat Rotolo.

“The goalie went with me and shot across and I don’t think he expected that,” Hurley said. “It was kind of flip floppy, knuckle puck so it was hard to read and it went in.”

Both teams had ample opportunity to score throughout the game, but not much on the power play. Just three minor penalties were called, two on Muskegon and one on Green Bay.

Nicholas Schilkey ran a shot off the goalpost midway through the first period that nearly gave the Gamblers the lead.

In the second period, Lindskoug made several great saves, including one on Alex Kile from close range.

Muskegon’s Cam Darcy had a good chance against Rotolo as did Adam Gilmour, also in the second period.

“It was a much better effort,” said Lumberjack coach Jim McKenzie, comparing Friday night’s loss to Saturday night’s victory. “I think we worked pretty hard. It was tonight we didn’t have the turnovers.”

Green Bay, which came into the game having won eight of its last 10, did pick up one point in the standings and are now in third place in the Eastern Conference, four points behind the second-place Lumberjacks.

“They are playing some great hockey,” McKenzie said. “They played great the last time they were in here and we beat them by a goal. Obviously, they won everything last year.

For Muskegon, it was its seventh home victory in 11 games at Walker Arena.

“Those are the games you love to play in,” Hurley said. “They are super exciting and it was a great win for us. We bounced back from last night’s game.”